Remembering: Grand Dames and Why I Love the Writers’ League of Texas 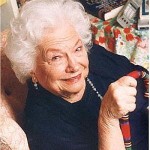 This past Saturday, Liz Carpenter died from pneumonia at age 89.  For those of you who may not know Liz, among many, many accomplishments, she was Vice President Lyndon Baines Johnson’s press secretary when President John F. Kennedy was assassinated.  She wrote the words Johnson spoke to the nation immediately after Kennedy’s death:

This is a sad time for all people. We have suffered a loss that cannot be weighed.  For me, it is a deep personal tragedy.  I know that the world shares the sorrow that Mrs. Kennedy and her family bear.  I will do my best.  That is all I can do.  I ask for your help and God’s.

She was also a rebel-rousing, loud-talking, quick-witted yellow dog Democrat.  For those of you who may not know what that is, it’s a Texan who will vote for an old yellow dog over a Republican.

The day after Liz’s death, I read in the New York Times that Body Heat actress Kathleen Turner was about to star in the one-woman play Red Hot Patriot:  The Kick-Ass Wit of Molly Ivins.  I think most of you know who Molly Ivins was.  If not, she was a fiery liberal columnist and co-author of Shrub:  The Short but Happy Political Life of George W. Bush.  In other words, she was a rebel-rousing, loud-talking, quick-witted yellow dog Democrat.  Molly died in 2007 from breast cancer.  She was 62.

The New York Times article mentioned that Kathleen Turner used to hang out with Molly and Ann Richards.  For those of you who don’t remember Ann, she served one term as governor of Texas.  She ran for a second term but lost to George W. Bush.  Arguably, she’s best known for her 1988 keynote address at the Democratic National Convention where she spoke about W’s father:

Poor George, he can’t help it.  He was born with a silver foot in his mouth.

To say the least, Ann was another rebel-rousing, loud-talking, quick-witted yellow dog Democrat.  She died at age 73 from esophageal cancer.

Now my far right-wing friends might fear that I’m about to write what they may call some liberal promoting b.s.  I’m not.  I’m going to write about what I remember – my memories of these three Grand Dames of Austin and why I love the Writers’ League of Texas.

For the most part, I knew these three women only because of the Writers’ League.  The one semi-exception is Molly.  I met her not long after I moved back to Texas. 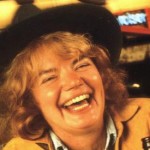 Utterly starving for some writerly camaraderie, and trying to move forward my career as an author, I attended a writers’ conference in New Orleans.  I remember I wore a red pants suit, wanting so much to stand out and make a professional appearance to any literary agent I might meet.  I also remember standing alone in the conference hotel elevator, the doors closing, when they burst open and in squeezed Molly, one of the conference speakers.  Her big and tall body filled that elevator and so did her smell.  She steamed sweat.  In fact, sweat as plump as raindrops dripped off her and spotted deep her navy dress.  And then she smiled.  Oh, man, that was big too.

I have no idea what we talked about.  I think maybe how she was running late for her panel.  I think she’d had a drinking lunch with some of her buddies.  And I think I was wondering how she was going to freshen up in time to make it to her panel.  But she made it, rushing in just like she’d rushed into that elevator.  And she was oh-so-entertaining, though I don’t recall any flaming liberal politics shooting out of her mouth.

Years later, I was helping with publicity for the Writers’ League’s first of three annual fundraisers held at Esther’s Follies, a downtown Austin institution known for magic and irreverent comedy.  We’d named the evening Molly’s Follies because Molly was the guest star of our show.  Graciously, she’d waived her normal appearance fee so that every ticket we sold went straight to the Writers’ League.

The night of the event, she was harried again, as she was running a bit late.  And just like the first time we’d met, she seemed to burst into the room, steaming with sweat.  I got her a drink and we sat down to talk and calm before her appearance.  Again, I don’t remember what we discussed.  I just remember that like in New Orleans, she was gracious and treated me like I was “somebody,” rather than a struggling wannabe.

More years passed.  She suffered her first breast cancer diagnosis, and I was sitting in the Tree House Italian Grill, when I looked up and spotted Molly sitting at the bar by herself, drinking and eating dinner.  As I exited, I veered over to her, reintroduced myself, and said hello.  Molly smiled that big grin, pulled back the stool next to her, and invited me to join her.  I said thanks, but no thanks, and I regret that.  I could have shared a drink with history. 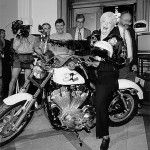 The year of the Writers’ League second Esther’s Follies fundraiser, I served as chairperson and producer of the event.  Ann Richards was to be our star.  So was Liz Carpenter.  Liz had booked Ann for us, and since Liz had done us the favor of getting our former Governor to perform for us for free, … well, you get the idea, … Liz was added to the program.  Then Ann backed out.  I begged Liz to get us another big name because I didn’t think Liz was a big enough draw by herself.  I suggested she call her friend Carol Channing.  Liz turned that wide mouth of hers into a shape that clearly said, even though no words were spoken, “Get real.  I’m not going to call in a favor that big for you.”  She called Cactus Pryor instead.  And I thought, oh, crap, here goes failure.  As proof, our ticket sales were going nowhere.

But we trudged on.  I drove Liz to our rehearsals, hefting her in and out my car as her floral muumuus and brightly painted cane fought against me.  Bumping down the streets of Austin, I tried to turn her cell phone on and off for her because she couldn’t do it.  I couldn’t either.  Then she could, and I looked like an idiot.  I also drove her home after rehearsals, as she ordered me into which lane at which time.  In between bellowing me driving instructions, she talked about how she was furious with Ann for becoming a lobbyist, but most of all for lobbying for things that were so unhealthy for Americans.

I picked up Liz and drove her to KUT radio for an appearance on John Aielle’s Ekletickos, too.  We were both supposed to be on the show.  Then, and I’m grinning as I write this, Liz introduced me – not as the producer of the show, not as the chair of the fundraiser, but – as her driver.  I wondered if she’d ever before had a driver with two masters degrees.  I imagine she had many of them.  That’s the way Liz was.

Anyway, Liz had barely told her first joke to John before the phones started ringing over at the Writers’ League office.  Over the next two hours, we sold every single ticket.  I was completely and utterly wrong about Liz Carpenter not being a good enough draw.

Then, Ann Richards rejoined our show.  In her honor, we named the event The Big Hair Follies.  It was to be held on a Sunday night.  That Sunday morning, I believe around 10 AM, my phone rang.  It was Ann, and she was furious.  “Who’s the bozo in charge!”  Ann didn’t speak in question marks.

She ranted.  She raged.  About everything.  She even complained about the Big Hair Follies name.  She no longer had big hair, she said, and she hadn’t had big hair in years – therefore, the name was ridiculous.

Oh, geez, I thought, this is going to be a rough day.  It seemed with everything I said, Ann came back with a slam.  Then, as we were closing our conversation, I said, “Would you like me to pick you up tonight?”

“Why!  You think I’m too old to drive!  That I can’t drive myself!”  Again, she didn’t speak in question marks.

There were other events going on in the same area that night, parking would be difficult, and I didn’t think she’d want to fight that, I explained.

That night, I found myself knocking on the door of our former Governor’s condominium.  I remember she was impeccably dressed in a navy blue pants suit with a matching navy blue leather portfolio that held her speech for the night.  I remember I coveted that leather portfolio because it was so classy.  It had her name on it, tastefully, not boldly.

Governor Ann climbed into the front passenger seat of my car while a friend of hers climbed into the back.  As I drove, Ann smoothed her hand over the dashboard and said, “This is nice.  What kind of car is it?”

“A Jeep Grand Cherokee,” I answered, stunned that she didn’t recognize it.  At the time, it was one of the most popular cars in America.  And that was about all I said on that drive from Lamar to Sixth Street.  Instead, I listend to Ann and her friend talk, trading gossip as if I weren’t there.  And I smiled inside thinking how lucky I am to hear these insider secrets.

At Esther’s Follies, Ann and I stood alone in a darkened hallway, as she waited to take the stage.  This time, I spoke.  I remember the topic of our conversation, but I don’t remember the details except that she listened and softly replied with a caring tenderness that I will never forget.

When she took the stage and performed her speech, I stood in awe.  Every insult she’d launched at me that day was in her talk.  Only her tone of voice was different.  And that one little change had me laughing at every word, not just because it was funny, but because I realized she’d used me to rehearse, and I felt honored and proud to be a part of that.

I sent Ann a copy of my book Wasted when it came out, and she sent me a thank you letter.  “I’ll take it to the beach and read it over the Thanksgiving holiday.”

Oh … my … gosh.  My book was going to be spending Thanksgiving with Ann Richards and her family.  I smiled as big as Molly Ivins.  In fact, that’s something all three of these Grand Dames had in common – great big Texas smiles. 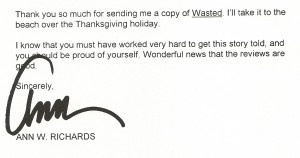 Now I feel like I’ve slighted Liz some because I worry I’ve only conveyed her bossiness.  But then again, she is the one who pulled off the Big Hair Follies for us and sold all of our tickets.  And she is the one with whom I had the most interaction because Liz Carpenter continually supported Austin’s writing community.  So, we often found ourselves at the same events.

At those gatherings, Liz always managed to crack me up simply because she never remembered me.  I’d spent a week driving her to and fro Westlake and Austin.  I’d been re-introduced to her at countless parties.  I even remember lunching with her at the Four Seasons Hotel, and that’s where I realized that Liz Carpenter had the most amazing memory for long ago details, but she couldn’t remember squat that happened 10 minutes ago.  But when I was around Liz, that didn’t matter, because I was laughing so hard as she wove those long ago memories into fascinating tales of history.