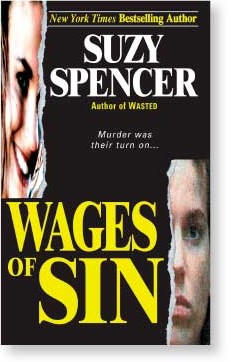 It was a packed Friday night at the Yellow Rose strip club in Austin, Texas. Stephanie Martin glanced around the room. Cigarette smoke choked the air, but Martin didn’t notice. All she saw was the mesmerizing hazel-green eyes that lingered on her.The man with the eyes motioned her over to his table. Softly, in the din of the music, he said, “Can I buy you a drink?”

Martin sat down as the customer kept his eyes steady on her eyes.

He asked her about herself…and he listened.

She asked him if she could dance.

She insisted that she dance. Still gazing into her eyes, he lightly touched her shoulders and her hips, gentlemanly, assuredly.

“Tell me about you,” she begged.

“Oh, nothing.  I work for the government.”

He shook his head. “Let me get you another drink?” He signaled the waitress.

Martin talked him into drinking a B-52 with her. “Now tell me what you do,” she begged.

His beeper went off. He looked down. “Excuse me,” he said. “It’s Fred. I’ve gotta go make a phone call.”

He disappeared. Martin waited for him. He was worth waiting for. He was confident and comfortable, not macho.

He said he owned a ranch in Montana with 200 horses on it. He told her he traveled a lot.  “Sometimes,” he said, “I have to kill for my country.”

She rubbed his thighs. She just wanted to watch him and listen to him talk. His voice was soothing. She sat in his lap.

“Why not give me your phone number?” he said.

“No,” she said, and told him about her live-in boyfriend.

“I still want to you to call me.” He scribbled down his phone number and pager number. Three or four hours after she first sat down with him, Will Busenburg left.

Martin wanted to call him, but she didn’t. She knew he’d be back. She counted up the money he’s spent on her—$300.

A week and a day later, Stephanie Martin spotted Will Busenburg across the room. He sat in the Rose with four guys, just a half hour from closing time. Martin walked up, smiling.

Busenburg turned to the men. “Okay, you can go now.”

They silently got up and left.

“They all owe me a favor.” His voice was deep. “I saved their lives on a job.”

Magnolia Cafe was a popular rustic Austin restaurant that served health-food nuts, junk-food junkies, yuppies, hippies, gays, and straights at every hour of the day and night.

“I love their gingerbread pancakes,” Martin exclaimed. It was about 3 A.M. “And their black beans.”

A slacker-looking waitperson rushed up and flipped open an order pad.

“The ham and cheese omelette,” said Busenburg, “and I want cheese all over it.”

“That is so unhealthy,” Martin replied. “You do not need to put that cheese all over that omelette.” She knew she could sometimes be pushy. “It’s already in it.” She ordered the gingerbread pancakes.

Over their breakfast, Busenburg slowly said, “My father was a Green Beret who physically and sexually abused me.” Tears began to eke from his eyes. “When I was nine years old, he was abusing me, and I shot and killed him in self-defense.”

Martin gasped. She thought he looked, at that very moment, like he was reliving the event. “Why are you telling me this? You just met me.”

“Because you’re different,” he answered, gazing into her eyes. “You’re different. You’re the first girl I’ve met that I feel I can open up to.” He looked away. “After that, they put me in a boys’ home. It was so strict, but that’s where I learned my manners.”

“Then my mom and my sisters abandoned me because I killed my father. They really abandoned me after I went into the boys’ home. I always hated my mom because she let my father abuse me. I was suicidal for a year.” He started to stir the cheese in his omelette, then stopped.

“That was in Montana.” He stared out the window and into the night. “There was this man there. I called him my grandpa, but he wasn’t really. He just saw me at the home and thought I was a good worker. So he adopted me and took me on his ranch. He invented the orthopedic hip.”

Busenburg said he and his brother-in-law, due to the “grandpa’s” influence, started their own orthopedic company. That’s why Busenburg was in Austin, to oversee the company. In the basement of Intermedics Orthopedics, they planned their missions … their missions to kill for the government.

“He was in the CIA,” Busenburg said, still talking about his “grandpa.” “He’s the one who encouraged me to go into the Army. One day he saw me sharpshooting. He thought I was good at it and suggested that I practice it more. I did, and I worked my way up to Special Forces.”

The Special Forces eventually led to the CIA, where he earned his living making hits: $15,000 for an easy target, $25,000 for a tougher one, he told Martin.

Busenburg went silent as he stared out the window at a rotund, old oak tree.

“Will,” called Martin. “Will? What are you being so quiet for?”

“I just remembered something.” He sat silent again.

He didn’t talk for the longest while, then finally uttered, “One time, on one of my missions, I had to sit up in the branches of a tree, for hours stalking my target before I had a chance to shoot him.”

“That tree,” he gestured outside, “reminds me of the tree on that mission.”

A couple of days later, Will Busenburg gentlemanly opened the door for Stephanie Martin to enter the apartment he shared with Chris Hatton. Hatton sat in the living room drinking and watching a video.

Martin asked, “What is it?” She saw uniformed men in hats walking across a stage receiving a piece of paper.

“That’s when I made in into the Navy SEALS,” said Hatton.

“So…why do you watch it all the time?”

He took a swallow of his drink. “Because that’s what I always wanted to do, and I’m mad that I went AWOL and gave it all up.” He took another swallow.

She thought about how Busenburg said he killed people—sharpshooting or with his hands. She looked around the room and noticed a dartboard on the wall and knife holes in the Sheetrock. “So…how do you make your hits?”