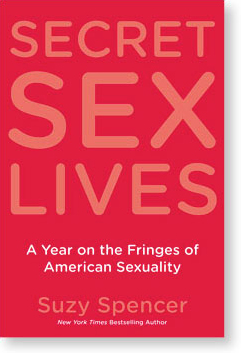 Typically, Coyote has an hour on his computer before his wife of thirty-five years comes home from work. That means he has to be alert, quickly search Alt. com, type rapidly—though he is a two finger typist—and be ready to shut down everything as soon as he hears her enter the house. He thinks his wife is an angel. But as he sat at the computer one afternoon, he couldn’t stop staring at the picture of the blindfolded woman whose hands were cuffed to her ankles. Her husband had invited Coyote to have sex with her.

On the appointed day, Coyote pulled on clean blue jeans, his work boots, and a fresh, nice shirt. He didn’t like any odor. If he walked in and a woman stank, he was right out the door. He climbed into his navy blue pickup truck and checked his secret compartment behind the seat. There he stowed his cell phone, which he called his “untraceable” phone because it was a pay-as-you-go TracFone. That way there were no bills or phone numbers for his wife to find. And though she knew he had the cell phone, she couldn’t use it. Coyote kept it locked with a code that he had memorized. After all, the phone stored the numbers to his sex contacts.

Hidden next to his phone was a Visa credit card, which his wife didn’t know about. He used it to pay for his Alt membership, as well as AFF, and his sex rendezvous motel rooms. The Visa bill went to his office, not his home, and he made payment with a money order, not a check. The secret compartment in his truck protected his condoms, too, which he certainly didn’t tell his wife about. Lastly, it hid his stash of Viagra, which “kept him in the game” when he was “expecting a good long session.” Coyote got the drug from the Veterans Administration. That way his wife never knew how many pills he had and how many he used, though they made his face flush red. He swallowed back the little blue pill.

An hour later, Coyote pulled into Lampasas and parked at an intersection next to U. S. Highway 190, the road he knew the couple would be taking. Coyote liked to arrive early and watch for his sex partners, wondering if he could pick them out and wanting to check them out before they checked him out. He watched the highway and the motel across the way. He was sure they’d register there.

His cell phone rang—they were running late, but they’d be there. “We’re going to get a room and then we’ll call you back,” the wife said.

Coyote waited . . . and waited . . . and waited. The couple never called. But as he sat in his vehicle, he observed a couple drive into the motel parking lot. The man looked to be in his fifties and the woman in her thirties, just like the couple he was supposed to meet. Still, no call came. What the crap? He started his truck and drove across the street and into the motel parking lot. He parked next to the couple’s car. And he waited.

The man walked out of a room, over to his car, stared straight at Coyote, got into his vehicle, and drove off. Five minutes later, Coyote’s secret cell phone rang.

“Man, we got in the room and the damn phone wouldn’t work. I had to drive five miles back down the road to get the phone working.”

“I was sittin’ right next to you when you left.” Upon the husband’s return, he walked over to Coyote’s pickup.“When you get in there,” he said in a slight Northern accent, “you can do whatever you want to her. She’s yours. Give me just a few minutes to get her ready and I’ll give you a signal and come on in.”

“Sit down,” the husband said. “Have a beer with me.” He gestured toward his wife. “She’s not going anywhere.”

“Doesn’t look like it,” Coyote mumbled, his lips barely moving. He sat down and popped open a beer. He seldom drank before having sex. That was something he saved for the last few minutes of his drive home. But he had a cold one while he and the husband small-talked and the wife lay silent and motionless on the double bed.

Five minutes later, the husband again waved toward his wife. “Here’s the toys. There she is. Help yourself. Have fun.”

He timidly looks down at his plastic cup of iced tea as he tells me this.

We sit in a Whataburger restaurant, a fast-food place that I frequent too often but have chosen just because of that. Its employees will watch out for me.