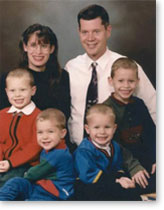 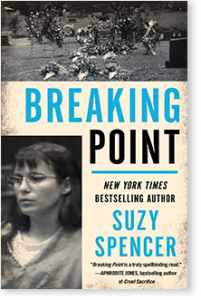 The coastal Texas morning seared hot, humid, and hazy with pollution. It was the kind of June 26 where sweat rings develop on crisp, white shirts simply by standing in one place for too long. Volunteers from Clear Lake Church of Christ eased from one end of their blacktopped parking lot to the other as if simply trying to stay in motion, to stir up a breeze and stay fresh…or to keep grief a few safe steps behind. They were there to direct funeral traffic.

Already, five black hearses were parked close to the sanctuary. Press photographers in jeans and sneakers watched them, tried to ignore them, stared at them, tried to act as though this were just another gig…not the story of five tiny, white coffins filled with children drowned by their depressed mother’s hands.

A white-T-shirt-clad man wheeled up in a small pickup truck. He stepped out of his vehicle, put on a crisp, white shirt, and tucked it into his khaki pants. “Are you a family member?” he was quickly asked. “Yes.”

Across the street, a woman carried out her garbage. A few blocks away, children played basketball. Life went on…for many. At the Yates house, flowers, balloons, toys, sympathy cards, and pamphlets about depression surrounded the tree that had become a shrine to the dead children. A TV crew knocked on a neighbor’s door and asked for one more interview.

At the church, angels, flowers, and ribbons with each child’s name adorned the five small caskets, arranged in a semi-circle, almost as if they were risers for a children’s choir about to perform. And promptly at 10 A.M.—seven days and ten minutes after Andrea Yates phoned 911—an a capella choir rose from the back pews of the church and began singing “Great is Thy Faithfulness” and “I Know Whom I Believed.”

Ten minutes later, Rusty Yates slipped through a side door and viewed his children’s bodies—so tiny that not even a nose peeked out from their white coffins.

Yates, slim and handsome in a dark suit and white shirt, stood before the congregation and softly began to speak. “This’s gotta be the hardest thing I’ve ever had to do.” He stopped to clear his voice, then continued. “I can’t tell you everything there is to know about them, but I can give you just a little glimpse of who they were.”

Yates looked heavenward, to a big screen that stretched above the caskets. A photograph of a grinning Noah appeared, his index finger outstretched and holding a bug, and Rusty Yates smiled.

“I’ll just start with Noah and tell you a little bit about him. And I really, I was thinking about how I would present this, because we’re at a funeral, we’re mourning. But I was telling my relatives some stories over the dinner table the other night, and that’s kind of how I’d like to be able to tell you these stories, you know. So if I say anything, you know, a funny story, don’t feel too awkward about laughing…I’m just going to…spend a few minutes on each child…

“Noah, he’s our first-born child…” Rusty looked into Noah’s flower-adorned casket. The seven-year-old dead child wore a multi-colored sweater decorated with an emblem of a truck. “He’s smart and very independent.” He loved to play alone, do crafts, and draw, particularly rainbows. “He’s probably drawn over a hundred rainbow pictures.”

Noah could take a trip to Wendy’s, dig out the free toy, play with it for ten minutes, then start taking it apart…only to put it back together again, all by himself. Yates reflected the pride of a father perceiving his child following in his engineer’s footsteps.

The seven-year-old had a book that played music, but he didn’t like the quality of the speaker. So he took out the speaker, got another talking book, took out its speaker and installed it in the first book…by using a hot-glue gun for a soldering gun. The hot-glue gun, Rusty smiled, was all Noah’s idea.

He spoke of how Noah loved to watch Who Wants to Be a Millionaire? and Scooby-Doo. One evening, he said, when it was way past Noah’s bedtime, Noah wanted to watch the movie Air Bud. Yates said no. Noah begged, and finally bargained—if he could answer a question about the U.S. Presidents, he could stay up and watch the video.

“And I thought to myself…I’ll just pick the absolute hardest question…and he’ll get it wrong and have to go to bed.” He asked Noah when President James Garfield was born. “And just before I could hardly get the sentence out of my mouth, he said…‘1831.’ He had a big smile on his face.” Noah had learned the date by studying a placemat on the table with information about the Presidents.

“This picture here, that’s him. He was a very gentle boy.” Noah loved to collect bugs, everything from bumblebees to frogs. His father spoke of a trip they’d taken to Florida, with a bug jar containing a caterpillar in their vehicle. That photo, Yates said, was Noah with the caterpillar. And as they drove, Yates heard “my wife and Noah and everybody” yelling, “It’s coming out! It’s coming out!” The caterpillar hatched into a butterfly that they soon set free.

Yates stared into Noah’s casket. “That’s kind of the way I feel about Noah. It’s time to set him free.” He touched his child’s coffin. “I love you,” he softly spoke.

The father crossed over to John’s casket, looked in, and then reached toward him. John, who wore an orange-and-black sweater, was a “rough-and-tumble kind of guy” who loved to roughhouse, play T-ball in a home school league, and had a contagious smile with a gap between his teeth. Whereas Noah had a rattle that he loved to caress, John threw his rattle across the room. John, he said, made friends easily and loved to have his brothers around. “Can Noah go? Can Paul go?” He patted John’s coffin. “I love you, John.”

Four blue balloons, and one pink one, flew behind Paul’s coffin. Yates gazed into Paul’s casket, looked as though he were touching him, and wept, “Paul, he was just the…Paul, you know, perfect, precious Paul.”

Three-year-old Paul was the only boy in the bunch who loved to hug, Yates said, and because of that, all the other children wanted to be with him and share his bunkbed.

“He was also the best behaved of the children…you just ask him to do something once and he just did it from then on. It’s like, my wife asked him to close the bathroom door when they left, ‘cause we had a little safety lock on there, and no one did it except Paul.”

Yates once asked Noah who was the best behaved and Noah answered Paul, followed by himself.

Each morning, Luke got his bowl, his spoon, and his cereal, climbed up in his chair, and waited for someone to come pour his milk for him. “He’d do everything he could himself.”

He truly thought he was ten feet tall and could make the tallest basket in basketball, despite the fact that he was only two years old. One night, he reached up to the bright, full moon, believing he could touch it.