With Fifty Shades of Grey grossing nearly $250 million in worldwide ticket sales in its first weekend, I guess it’s no surprise that there’s been renewed interest in Secret Sex Lives: A Year on the Fringes of American Sexuality. To say I’m pleased with that is an understatement. 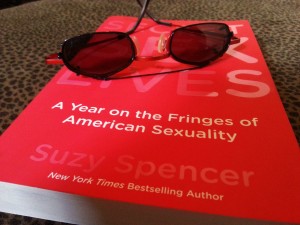 I got my first hint of that interest when a photo journalist for the Chicago Tribune sent me an email that had “Loved Your Book!” as the subject line. Her gracious email resulted in a beautiful Chicago Tribune review of Secret Sex Lives. In the review she wrote, “Spencer’s memoir is a touching, honest look into the intimate lives of a few and a deeper look into the author’s own inner conflict with sexuality.”

Ah yes, that makes me sigh with happiness.

A week or so after the review came out, I was asked to appear on Good Day Austin, my city’s Fox affiliate morning show. I was told I was going to be talking about loneliness in America. Instead, we discussed Secret Sex Lives. In less than four minutes, we covered how the book started and how it evolved. I found it be a remarkable good summation. 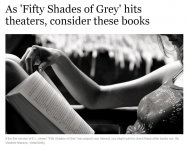 That night, I was in my favorite bookstore, BookPeople, to record The Write Up with Owen Egerton. Owen is a novelist, screenwriter, director, and improv artist, and The Write Up is a podcast he does for KUT radio, Austin’s NPR affiliate. During  most episodes of The Write Up, Owen talks in depth to authors about their work, their influences, their motivations, etc. So I was prepared to tell him about my love for Dennis the Menace comic books and how I couldn’t stop reading about Johnny Tremain, Patrick Henry, and the like during my elementary school years.

To say I’m now in love with Rebecca McInroy is also an understatement. And when The Write Up podcast goes online, I’ll definitely be inserting a link.

But let me clarify that mixed with all this joy is the reality of writing and publishing. Some days are winners. Most days aren’t. With that in mind, my friends at The Writing Barn asked me to blog about rejection. Specifically, rejecting rejection. Today, that essay went live. I hope “I’m Tired of Rejection” makes you laugh and, if you’re a writer, gives you hope. After all, writing  and “success” at writing is not something that happens in a nanosecond. It takes time, often years, and perseverance, particularly on days when you want to give up and others encourage you to give up.

Perseverance. Let me say that word again. Perseverance. In the world of book publishing, publishers, editors, publicists, sales reps, bookstores, reviewers and even the general public usually give a book three or four months to succeed. If a book isn’t a success in that length of time, they must move on to the next possible hit, because there are stockholders they have to please with profits. So to see Secret Sex Lives reviewed in the Chicago Tribune two and a half years after the book was first published is a miracle, a miracle for which I am grateful.