I’m not exactly a social human being. I’d prefer a night, by myself, in front of my TV to a fabulous party, anytime. 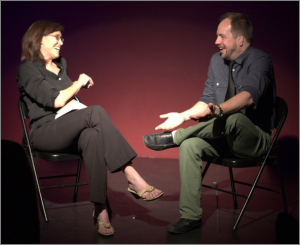 Laughing and joking with Justin Davis, director of “The Next Chapter.”

People don’t always believe me when I say that because they see me out in public, speaking in front of groups, smiling, laughing, joking, appearing comfortable, looking like I’m having a good time, which often I am.

They just don’t know that I have to race to my car afterwards to sit in silence, breathe, be alone, cherish the quiet, the solitude.

I guess that’s why I love being able to cut myself off from the world to write, but I also know one has to be a part of the world to write. Otherwise, one has no stories. That’s often the writer’s dilemma. But that’s where I’m fortunate that I’m a journalist, too. I can sit and ask questions, delve into my sources’ lives, and not reveal much about myself — at least in that moment of interviewing.

Then I can come home, seal myself off with my interview tapes, and listen to our conversations over and over and over again until I hear my sources’ voices and hearts and can put them into books for you to read.

I’m at that point now. I need to seal myself off from the world so that I can write. I hope you understand and don’t leave me, because the truth is that I need you and your support.

This doesn’t mean I won’t check in on occasion and write a blog or two or be on Facebook or Twitter. But it does mean I won’t be doing it as frequently. In the meantime, I leave a few recommended posts for your to reread.

For my dear true crime fans, I recommend “Mixed Emotions & Gratitude for My ‘Wages of Sin.'”

For my cherished true sex/Secret Sex Lives fans, I suggest “Wildly Monogamous.” It just might turn you on.

For my writer friends — those struggling and those succeeding — I encourage you to read “Root Dirt.”

And if you’d like a bit more entertainment, please, watch the video below. It’s from a night of improv inspired by Secret Sex Lives. In essence, Justin Davis, an actor, director, and improviser, created an improv show called “The Next Chapter” in which he interviewed me, I read a bit of Secret Sex Lives, and then he and his troupe of improvisers created what they imagined to be the next chapter of the book.

It was an amazing performance as the improvisers were not allowed to read Secret Sex Lives prior to the show and yet they got so much of the spirit of the book just right — so much so that I nearly wept at the way they closed the show.

And, yes, someone played me. Now here’s the video: 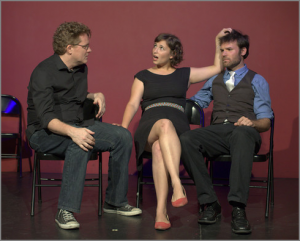 “The Next Chapter,” a night of improv inspired by “Secret Sex Lives: A Year on the Fringes of American Sexuality.”

By the way, Justin has invited me to do another show at the Institution Theater, “You Think You’re So Smart.” Come out and see it on Friday, September 20, 2013, at 8 P.M. Yes, I’ll actually be there … and be quietly sitting in my car afterwards.