Several months ago, poet-singer-songwriter and friend Brooke Axtell posted on her Facebook page a book trailer for the novel Beautiful Garbage. I clicked on the link, saw that the video was almost seven minutes long and nearly didn’t watch it. I usually have to power myself through a clip that’s only two minutes long. But I clicked play and was barely into the video when I was hooked … on both the book trailer, which is like a short film, and the novel.

I had to read Beautiful Garbage by Jill Di Donato.

Brooke and I met at Whole Foods, which, if you know me, is an odd place to find me, but when Brooke handed me a copy of Beautiful Garbage, I was thrilled that I was sitting there eating a salad rather than a Whataburger hamburger. That night, I started reading the book.

To put it too simply, Beautiful Garbage is about a struggling artist in 1980s New York City – the era of literary brat packers Jay McInerney, Bret Easton Ellis, and Tama Janowitz and an era I love and can relate to. But since I haven’t made it clear, Beautiful Garbage isn’t about New York’s literary arts scene. It’s about New York’s 1980s’ visual arts scene – painters, photographers, and, like Di Donato’s protagonist Jodi Plum, sculptors. It’s story filled with lightness and darkness, hope and despair, and drugs, alcohol, and sex – just like the 1980s. And it’s a book that I think many of my Secret Sex Lives readers will love.

I inhaled Beautiful Garbage. So when Brooke invited me to do a Q&A with her friend and publicity client Jill, I said yes.

To be honest, what you’ll read below isn’t the way the Q&A started. I first asked Jill some questions that I wanted answered due to the fact that Jill is an English professor at Barnard College and a sex columnist at the Huffington Post. But I’m going to leave those questions for another blog post and am limiting today’s post to discussion of Beautiful Garbage.

Suzy Spencer: Every reader always wonders how much of a novel reflects the author’s own life. So how close is Beautiful Garbage to your own life?

Jill Di Donato: Beautiful Garbage tells really two stories: that of young Jodi, and that of adult Jodi. My hope is that she integrates at the novel’s conclusion.

Much of the psychological exploration — the flashbacks, how childhood trauma affects adult attachments to people — was very informed by almost three years I spent in analysis. When the book came out, forget all the sex and drug references, I was most nervous about how my parents would react to the portrayal of the parents in the novel. I had to explain to them, “These are characters; they are not you guys.” But I guess all novelists say that.

JD: The 1980s, as I remember them, were characterized by intense feelings of fear and brinkmanship. On the other hand, there were so many glamorous distractions. The economy was good — pop culture became more accessible to the public; music and hair were all about amplified volume. Disco was dead and instead came something much more gritty: punk, rap, metal. So you’ve got this mix of terror and excitement. I like that as a backdrop for these characters.

I grew up in New York City in the 1980s. I was a kid, a young kid, but I was a sponge. And my parents were the classic hippies turned yuppies, but not yuppies in the negative sense; they had just moved on from their more humble upbringings in East New York and Canarsie. They exposed me to the real city, not just the Met and Central Park. My mom, sister and I walked everywhere. And my dad was always honest about what was going on, not just in New York, but in a global sense. 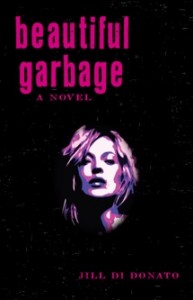 1980s historical references slip into the novel. I had to pull back on the level of attention I gave them, as they were intended to be atmospheric, but they are very serious political and social issues that in many ways are connected to political issues that remain unresolved today. For example there’s mention of an Afghani war rug, a TWA airplane hijacking, hostages, El Salvadorian death squads, violence in South Africa, the AIDS epidemic. As a child, I was totally aware that these things were going on; the news was always playing and I was curious. My parents are both educators, and invested a lot in my education. I couldn’t fully understand politics, as I was maybe 8, 10. But like I said, my parents didn’t shield me from the news, so I had these events logged somewhere in my consciousness. What they all share, these events, and what I think the ’80s permeates, is this idea of coy negotiation with the threat of violence.

SS: Though all characters, including the protagonist, need to be multi-dimensional with both positive and negative character traits, Jodi isn’t always the most likable protagonist. Talk to me about writing her and your creative decisions to make her so flawed that she could … well, basically rape a boy.

JD: Jodi being an unsympathetic character, who among other things, rapes a boy when she was a child, cost me a lot. I had big, commercial publishers interested in the book, but not Jodi, which is why I went with She Writes Press with Brooke Warner as my editor. She allowed me to let this flawed woman have a book. I can’t tell you how many emails I got from female and male editors who loved so much about Beautiful Garbage, but thought Jodi was so detestable, the readers wouldn’t root for her. Creatively, I disagree. I feel like Jodi struggles with darkness but does the best she can do for herself. Her being flawed is okay with me; I’ve battled perfection-striving my entire life. So my debut protagonist bucks the system. Jodi breaks my heart a little, and she can be quite self-indulgent and annoying at times. But she has adventures.

JD: Jodi’s rape of the boy, who is younger than her, is not only sexually graphic, it’s about power, arousal, and humiliation. It’s also her first sexual experience. I remember my first sexual experiences as much more exciting than the sex I have today, so perhaps, that’s why the scene has more emotional pull to it than other sex scenes in the novel. For Jodi, she relishes in what she did with the boy, but because it was so repugnant, can’t face that, and blames her involvement on her friend Isla.

SS: Why did Jodi seem to have more guilt over Isla [who was Jodi’s childhood friend and I can’t reveal more than that or it will ruin the story] than she did the boy?

JD: She cared about Isla. She didn’t care about the boy.

JD: Women can be attracted to one another, have sexual longings for them, but never conceive of acting on their feelings; I think that’s where the vagueness comes from. This has been my experience with other women because I’m intrigued by female beauty. In the end, I treasure my female friendships more than a passing desire. I feel in a way, Jodi is deep down an asexual person and has these intense friendships instead of great romance. She can be resentful of her friends’ beauty, which is not something I admire about her. I imagine after the novel ends, she’s going to have an amazing Parisian love affair because she’s finally over her baggage and can open up to being sexual. At least, that’s what I hope will happen for Jodi.

SS: I have a lot of followers, especially on Twitter, who are struggling writers. So for them …

JD: For struggling writers, damn. It’s never not a struggle. Writing requires never-ending negotiations over constants in our daily lives: time, diet, money, not having money, not having time. Drinking coffee all day and then realizing at 7 PM you want to consume a day’s worth of calories in one meal. There are so many times, even after being published and having my work in different outlets and media, where I’m like, why did I choose this path? It can be torturous. You want to compare your success to your peers. This is when you have to stop and remind yourself that you’re a writer. You’re a writer regardless. And if that doesn’t do it for you, give you that wry smile, maybe look into something else. But if you do get that wry smile, and I mean, self-smile, like being a writer satisfies something internal, you have to keep at it. Can’t stop; won’t stop; don’t stop.