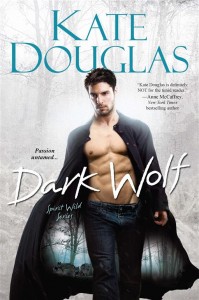 “Dark Wolf,” the first in the Spirit Wild series.

Suzy Spencer: How does the print market for erotica compare to the e-market, particularly since Target now has an erotica section?

Kate Douglas: I really believe that the best thing Fifty Shades of Grey has done is change the marketing. I had readers who said they really wanted to read my books but didn’t want those sexy covers where the kids could see them. Since they weren’t available as ebooks in the beginning—which they should have been—I lost a lot of sales because of those covers. Plus, a large number of booksellers complained to me that they couldn’t display the books where children might see them. More lost sales. The understated cover of Fifty Shades makes all the difference, and I am thrilled to see publishers finally realizing what I think a lot of authors knew all along—that while readers might love to look at that sexy guy or couple in a hot clinch on the cover, they really didn’t want those books sitting on the coffee table in the living room.

The covers also embarrassed a number of my male readers—and I have a lot of them. One reader was stationed on a ship in the Persian Gulf and I finally sent him a cloth book cover for my books after he emailed me and complained that one of the other sailors had come on to him, thinking that he must be gay if he was reading books with naked men on the front. I finally stocked up on cloth covers and would send them out as gifts to the guys who complained.

Of course, now that they’re all available as ebooks, that’s no longer a problem, but I believe that ebooks are what first exposed readers to erotic romance. I started writing the stories for Ellora’s Cave in 2001, at the time a small ebook publisher turning out sexy romances. They were all the standard male/female pairings in the beginning, but the euphemistic “bedroom door” wasn’t merely left open, it was put on stage and spotlighted. I think that Ellora’s Cave’s success selling ebooks to readers before many people even knew what ebooks were is what jumpstarted the genre as a whole. Of course, this was limited to those who were active online and involved in online communities, since the books were only available in the very beginning on CDs. What’s funny is that when EC was still a tiny, one woman operation (there were twelve authors writing in the beginning, and I think three of “us” were the owner under different pseudonyms) sales exploded, and as the company expanded, more authors came on board, and sales skyrocketed, the New York companies began to take notice.

We used to laugh about the sales and where numbers were the best—and America’s Bible Belt showed some of the highest sales figures of all. The fact that women could buy those sexy books online without letting the local bookstore owner know what they wanted to read made them really popular in the more conservative communities. I still have readers tell me that if they couldn’t buy my books online, they wouldn’t be able to get them because then “people will know what I’m reading.”

Again, Fifty Shades has brought that reading demographic out in the open. When you can buy the book at Costco, it’s no longer a forbidden book. It’s something you just throw in the cart with the toilet paper and dog food. However, having them available as ebooks makes it even better—instant gratification and complete anonymity. In a nation that’s so hung up on its own sexuality, it really is the perfect arrangement.

However, my Aphrodisia titles with Kensington are not, to my knowledge, making it into Target or other mainstream stores yet, though that could be happening and I’m just not aware of it. I think it makes a huge difference when they’re out in those places where people can make an impulse buy, and generally, once readers get through the initial shock over what they’re reading, they settle into the story, get caught up in the storyline and will hopefully come back for more of the same. 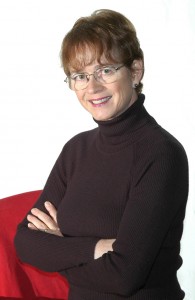 I think the most important part of my marketing has been to connect with readers and let them see that yes, the author of “those” books is just a regular person. I’m not warped, not dressed in a bustier and wearing fishnet stockings and spike heels—thank goodness!

I will never forget a lunch with members of Kensington’s publishing team, my agent and the vice president of marketing from Barnes &Noble when I was on a visit to New York. The vice president kept glancing across the table at me and then he’d bite back a laugh. I finally asked him what was bugging him (politely—I’m always polite) and he said, “You just don’t look like you write those books!” I replied that no, I looked like a 56-year-old grandmother of four. I’m now a 63-year-old grandmother of six, but at least in the beginning, when erotic romance was fairly new, I felt that if readers saw that the one who writes the stories they found so titillating was someone just as normal as they are, it made the stories more accessible.

SS: Everyone keeps talking about the demographic change in America. Do you see your niche changing and perhaps expanding? And does this affect your future plans for the genre?

KD: My core belief, that we don’t live in a monochromatic society and I don’t want to write one, has pulled in readers across the board. I can’t say that my books draw more of one group than another or focus on any particular demographic. I’ve gotten to know hundreds of my readers via Facebook, attending conferences and on our travels around the country where I stop and visit with small groups in bookstores and coffee shops, and they cross every ethnicity and social or economic group possible. I market to people who want a good, sexy story that’s all about honor and acceptance and love.

SS: Is there anything else you want to add?

But I had one more question for Kate.

SS: In 2010, journalist Brian Alexander wrote that erotica was the one booming genre that might keep the publishing industry afloat, and that was pre-Fifty Shades of Grey. Can you specifically address how the market has changed from 2010 to 2012 and did Fifty really have anything to do with the change?

I’m sorry I can’t offer more specifics. I’m a horrible business person—I love the writing. The selling? Not so much, though I do love connecting with my readers. And believe me, they cross all demographics—heterosexual, bisexual, homosexual and even a few transgenders. All races and readers from around the world. My fan mail is the high point of my morning, because I never know what people are going to write.

The classic, of course, is the one from the woman who wrote after Wolf Tales first came out, that I had validated her relationship with her German Shepherd, and she’d finally decided to leave her husband.

And no, I am NOT kidding. On that note, I really need to go shop for Thanksgiving dinner stuff.

In December 2012, I emailed Kate the Publishing Perspectives article, and she replied with this humorous tidbit of information:

KD:  I just got the cover copy for my new series, and this will give you an idea of the way Kensington has changed the approach, at least for my stories. The purple one is my first Wolf Tales, and the rest of the series followed the same design. The other is for the book releasing in April. I have high hopes for that one attracting more readers.

Funny story behind the first book, which essentially launched the new wave of erotic romance in 2006—the original art had the woman’s nipple showing, but one of the major chains—I believe it was Barnes & Noble—refused to shelve it, so they slid the art over far enough to lose the nipple. The next book I was in, the first Sexy Beast anthology, had a half-naked man, and if you look closely (which believe me, a lot of my readers did!) you can see pubic hair. Not a single word of complaint from the booksellers. Go figure…though one of the “prettiest” covers, Sexy Beast V, originally came out with a gorgeous “man flank” showing, but at booksellers’ insistence, he got “fogged over.” LOL…truly a disgrace—Paul Marron, the model, is an absolutely beautiful man.

And please explore Secret Sex Lives: A Year on the Fringes of American Sexuality, my memoir about my journalistic research into Americans’ alternative sex lives.