I asked a friend the other day to pray that I’d find the “right” book to write next.

“I want you to write a book with purpose,” she said.

I flinched. Every book I’ve written has had purpose, I think.

Certainly Wasted and Breaking Point did.

Wasted, the story of the murder of Regina Hartwell, allowed me to go into high schools and talk about drug and alcohol abuse, sexual abuse, emotional abuse, and physical abuse. Students literally crawled on the floor to get closer, to learn more, and they thanked me.

Breaking Point, the story of Andrea Yates, the Houston mother who drowned her five children, allowed me to go on TV and radio to talk about mental health issues, to alert people to the symptoms of post-partum depression and psychosis, and to talk about the lack of funding for mental health treatment, especially by insurance companies.

I feel that may be the most important book I’ll ever write.

But how can I compare Breaking Point to Secret Sex Lives: A Year on the Fringes of American Sexuality?

Breaking Point was one of those “ripped from the headlines” stories that St. Martin’s Press asked me to write and ended up being a book that forever affected my heart and brain. Yet, it was a book that was easy for me to talk about, because I believed in its message so strongly and because I was talking about other people’s lives.

Secret Sex Lives has been painfully difficult for me to talk about because, while it’s about other people, it’s also about me. It’s a memoir about my journalistic research into Americans’ alternative sex lives. And because it’s a memoir, I bared my soul (and a heck of a lot more). As a journalist, I don’t like baring my soul. I only want to talk about others.

In fact, I remember Heidi Richter, my first publicist at Penguin Publishing, stopping me in mid-sentence as we discussed Secret Sex Lives and Heidi telling me to quit talking about my sources and to start talking about myself. I was so terrified of doing that, though, that whenever anyone asked about me – or my family – in relation to Secret Sex Lives, I’d stop, think, stutter, stop, think, stutter, and nothing would come out of my mouth but the gurgling sounds of a drowning writer. 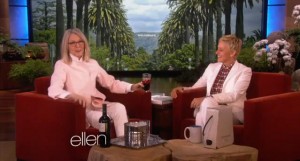 At least I’m in good company. Diane Keaton isn’t comfortable going on national TV and talking about sex either!

For all of my true crime books, I’d go to my friends in TV news and ask for media training. We’d have a casual lunch, discuss whatever book I was promoting, they’d ask me a few questions, I’d answer them, and they’d pronounce me media ready. I’d go on TV and radio and for the most part, feel comfortable.

When I found out Katie Couric was going to interview me about Secret Sex Lives, and when I found out she wanted to reveal the ending of the book, I freaked. I asked Heidi for additional media training. She promised me she wouldn’t let me go on the air unprepared. And she didn’t. Penguin hooked me up with Ellie Scarborough Brett of Bombshell Media. Ellie – and my fabulous friends – spent hours and hours with me until I could finally speak coherently about myself and my family within the context of Secret Sex Lives.

Still, when it came time to do the Katie interview, I panicked, in part because I was exhausted and had a sore throat from allergies, jet lag, and insomnia. In part … well … I’m not going to go into that. Just suffice it to say that despite all the excellent media training, I was absolutely terrified and my brain forgot words I needed to speak and jumbled the ones I did say. 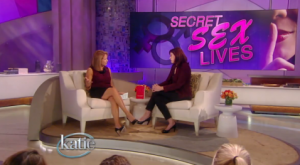 Two days after taping Katie, I was back in Austin and at BookPeople for my first Secret Sex Lives signing. I looked at the crowd – filled with friends and strangers – and started crying.

I don’t know that any amount of media training could have prepared me for the emotional tornado I was in and the destruction wreaked on my psyche by the judgment of strangers and some of my family.

Flash forward to March 2013 and South by Southwest. I sat in a SoCo restaurant listening to Will Courtney sing. It was my first non-business venture into the world since Secret Sex Lives had come out in October 2012, and I’d come out only to support Will. I’ve known him since he was probably eight years old. Still, I felt out of place. I was a non-hipster sitting alone in hipster SoCo during hipster SXSW. 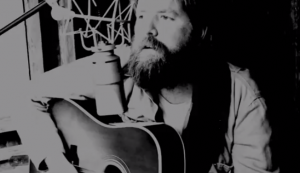 Will Courtney sings “A Century Behind.”

The restaurant was crowded, so I signaled people that they could come share my table. Most looked at me and looked away.

Did I say I felt out of my element?

Finally, two older gentlemen accepted my offer. We chatted, exchanged first names, and then the proverbial “what do you do” question came up.

“What do you write?”

“What kind of books?”

They wanted to know more, and I stuttered and stumbled before finally confessing that I write about sex.

At that, one of the men wanted to know my last name. After I said it, he knew exactly who I was. He’d read about me.

He made a vague reference to the ending of Secret Sex Lives.

He later read Secret Sex Lives and emailed me: “I am very curious as to how this level of self-disclosure has affected your life—I, a virtual stranger, know more about your thoughts & feelings about sex than I know about the vast majority of people in my life …”

It makes me want to crawl away and hide.

So how does this long-winded confession tie-in to writing a book with purpose?

Because when my friend told me she wanted me to write a book with purpose – and she is a friend who I don’t feel is comfortable telling others that I wrote Secret Sex Lives, one who I feel would be more comfortable if I hadn’t written it and never mentioned it – I suddenly realized that I’m tired of being panicked and afraid and shamed by having written the book.

I’m proud of Secret Sex Lives. It is a book with purpose. It is a book that has helped people. And I am comfortable with it, finally.

So ask me about Secret Sex Lives … about me … about my family.

I bet I’ll answer your questions in complete sentences.

And in the meantime, pray that I find my next “right” book.

You can order autographed copies of Secret Sex Lives from Brazos Bookstore in Houston.