The Taint Of True Crime

I wish I saw things the way other people do. I really do.

The other day, I was driving down the highway when I noticed a firewood stand on the side of the road. For most passersby, they’d simply see a man standing by the road selling wood. That’s not what I saw. Not at all.

I saw a young couple buying kindling to burn the body of a man they’d murdered.

In truth, there was no one there. Not a single customer.

So why did I see what I saw? 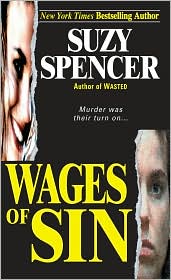 You see, in my book Wages of Sin, Stephanie Martin and Will Busenburg murdered Christopher Michael Hatton, then hauled his body to a lakeside park where they placed his corpse over firewood they had purchased, doused it all with lighter fluid, and torched it all in an attempt to hide their crime.

That’s why whenever I see firewood, I see Stephanie and Will and think of Chris.

You may have read Wages of Sin where I gave Stephanie approximately 60 pages to tell her side of the story and where she denies killing Chris, but admits to mutilating his body. Or you may have come across her on some of the various prisoner pen pal websites such as www.writeaprisoner.com. Or watched the story of Stephanie, Will, and Chris on Investigation Discovery’s Deadly Sins where Stephanie is depicted as the killer.

(When Stephanie was questioned by investigators, she confessed to the murder, then denied it. She later pleaded guilty, then denied she was the killer.)

After the Wages of Sin/Deadly Sins episode aired, I heard from Stephanie’s mother, who was very displeased with my appearance on the show and what I had to say about Stephanie and the case. She said I was not fair and unbiased and that she could assure me that every word Stephanie told me was the truth. “She did not kill Chris Hatton,” Mrs. Martin wrote. “She and we (all her family) have suffered much, too, and our lives will never be the same again.”

Certainly, that last sentence is the truth.

The following month, I received a three page letter from Stephanie, also expressing her unhappiness with me. She complained that I’d told her and others that I’d felt the need to tell the stories truthfully, but that I hadn’t. “I’m the opposite of all the adjectives your book, web site [sic] blogs, that show on the ID chanel [sic], and those shallow, judgemental [sic] readers and viewers say I am. You can judge how you want of my crime – it was horrible and I became a different person with Will. But don’t refer to me after almost 20 years as these same things. ‘Stripper killer’, ‘seductress’, ‘fantasized about killing people’; and the comment you made twice about my penpal [sic] site, claiming I’ve had ads on the internet for as long as you’ve known me and ‘I’m trolling the internet for benefactors.’ Really?”

For the record, I don’t recall ever calling her a seductress and Stephanie is the first one who told me she was on the pen pal websites and why she was there.

In fact, in her letter, she stated, “Do you even know how inmates in TDC [Texas Department of Corrections] make it in here? They either have someone who sends them money, or they hustle for what they need. We aren’t paid a cent, nor provided with enough by the state to get by.”

She also complained that “these cheezy [sic] shows” and I only focus on the crime, rather than focusing on what the convicts have done with their lives since. She talked too about how such shows – and I presume true crime books – don’t help the victims’ families as they have to “continuously see the awfulness of the crime and the perpetrators.” 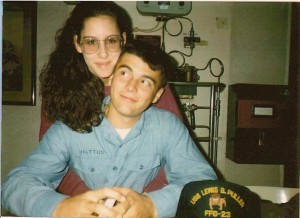 Chris Hatton and his then fiance Lisa Pace. Photo courtesy of Lisa Pace.

And there, I have to agree with Stephanie on the murder of Chris Hatton. While some friends and family members of some true crime books I’ve written have helped me with and supported my books (including Wages of Sin), and while some family members of other murder victims have pleaded with me to write books about their lost loved ones so that their loved ones are not forgotten, in the case of Chris Hatton, I learned after the 2013 airing of Deadly Sins, that the immediate family was very much against the book.

Brian Hatton, Chris’s younger brother, who also appeared on Deadly Sins, posted on my Facebook page that he wishes I’d never written Wages of Sin, because it makes him have to relive the nightmare of Chris’s murder.

A friend of Brian and Chris’s mother also posted on my Facebook page stating that at Brian’s and his mother’s cost “people are getting entertainment from the horrible way in which this young man was murdered.”

There are no words or actions that can erase what I’ve done and alleviate Brian’s pain or his mother’s. Saying I’m sorry is not enough.

So when Stephanie wrote me that it’s not fair that she received 50 years for Chris’s murder and Will Busenburg only received 40, that it’s not fair that I portrayed her as the shooter (I didn’t and never have because I don’t know for fact who pulled the trigger), and that I don’t care about her feelings, at this point, she’s right. I don’t care. I know I should because my faith is about caring for every child, but I don’t.