The Valentine of Gilda’s Club and Hope 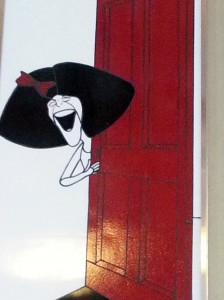 It’s a hot Tuesday, two days before Valentine’s Day, and I’m sitting in Gilda’s Club in Fort Lauderdale, Florida. I’m so happy in this 1930s house full of deep reds and laughing images of Gilda Radner that I’m almost in tears.

No, I’m not here because I have cancer. I’m here because my friend does. She’s just moved to South Florida, and I came down to help her get settled.

Yesterday, she made an appointment for an orientation at Gilda’s Club. At first I was ticked, because it’s my last morning here. I fly out in a matter of hours and I wanted to spend those hours with my friend, not sitting in a great room while she goes through club orientation.

But now I’m glad I’m here, because I feel like it’s a home – like a place where one wants to come in, lean back on one of the big red couches, relax and talk. I’m not even sure one needs to talk. Just the vibe is healing. 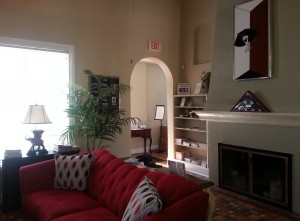 The great room in Gilda’s Club

Maybe it’s the vibe of healing laughter. Even some of the potted plants have images of a laughing Gilda on them and they make me smile.

Ironically, Gilda has Roseanne Roseannadana hair in the images, which I’ve been “suffering” while here, and yesterday I was quoting Roseannadana – “it’s always something” and “if it’s not one thing, it’s another.” That was while my friend was weeping and clinging to me as she pleaded with her health insurance company. They’d cancelled her coverage because her employer had terminated her since she can’t work. I hate that word “terminated.” It’s too much like terminal. My friend is stage 4 cancer. Terminal.

I keep telling my friend you don’t know that – that it’s terminal. She keeps saying, yes, I do. I keep saying there’s always hope. She’s keeps telling me there is no hope, don’t use the word hope, the doctors tell her she IS going to die. I tell her we all die, the doctors aren’t God, and they don’t know when she’s going to die, only God does. I repeat that there’s always hope. She tells me never to use the word “hope” to her. So I don’t. 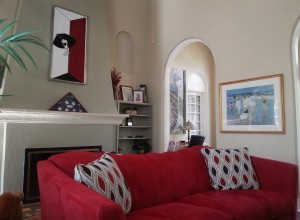 I love this place!

Today, I walk through Gilda’s Club. I see that the club offers classes for water color, for writing, for all kinds of things that I just know – I have to know this at this stage 4 – will heal at least the heart, if not the body. And this place reminds me Valentine’s. And that’s why I’m writing.

In fact, I started a blog a few days ago about Valentine’s Day, never finished it, and now maybe I’ve found the way to say what I wanted to say. You probably know without knowing it, that in the world of marketing, Valentine’s is considered a sex holiday. That’s why you’re seeing more advertising about lubricants and seeing bigger displays of condoms. But Valentine’s Day doesn’t have to be about sex. It doesn’t even have to be about romance. But perhaps it must be about love.

Let me emphasize, if I haven’t already made it clear, it doesn’t have to be about romantic love. It can be about the love of friends.

Right now, there is a group of teenaged girls sitting in Gilda’s library and I listen to them giggle as they tell jokes. “Why did the chicken cross the road?” And a kind gentleman named Sam walks in and begins to tell them who Gilda Radner was. I wish they’d known her themselves … because then they’d laugh when they hear “if it’s not one thing, it’s another” and “it’s always something.” And they’d know to keep putting one foot in front the other when times get horrible. And they’d know that Valentine’s Day doesn’t have to be about sex. Because right now, it’s really nice to hear my friend say, “I love you.” And I say, “I love you.” And she says, “But I love you more.” And maybe they could understand that cancer can heal old wounds of the heart and make distant friends close friends again. And I close my eyes, try to blink away my tears, and smile when my friend finishes her orientation, because when I look up at her, she is smiling, too.

Soon, we sit in her car, laugh and weep, and thank God for Gilda Radner and Gilda’s Club. To me, this is what Valentine’s is really about.

It’s Wednesday night. Valentine’s Day is just a few hours away, and I’m sitting back in Texas. Today my friend returned to Gilda’s Club for her first support meeting. She met a woman who has the same kind of cancer as she, same stage 4 as she. But this woman has been pronounced cancer free. When my friend told me this, I slipped and said, “That sounds hopeful.” Then I immediately apologized. But today, she said I could use that word — hope. That right there gives me hope.

Thank you, Gilda’s Club. You’ve given me the best Valentine’s I could ever hope for. And I hope you, my friends, have an equally beautiful Valentine’s.