In November 2012, I did an email Q&A with New York Times bestselling author Anne Rice re the future of the erotica book market. Portions of that interview appeared in Publishing Perspectives in December 2012. That article also included quotes from erotica luminaries Beth Kery, Kate Douglas, Rachel Kramer Bussel and more. Then in January 2013, I published here the first half of my Q&A with Ms. Rice — “Anne Rice Talks Erotica, Part I.” Now I give Part II, which completes the Q&A.

SS: As the vanilla world buys erotica, will the original erotica fan base require something even “kinkier?” In other words, what do you see as the future of erotica, when it comes to story lines and subject matter?

AR: Well, that is not what happened when vampires went mainstream. Far from wanting something darker or more exotic, vampire fans seem to have gone in the opposite direction and are embracing the domesticated vampire high and low. Vampires in high school, vampires in the neighborhood, vampires everywhere, that seems to be the trend. The fans of darker fiction continue to have their favorites and their goth world. So with erotica, it might be the same. We’ll see kink and S&M in more and more palatable and domestic frameworks. And the old guard, the lovers of the original motifs, and paraphernalia will go on enjoying the “classics,” like the Story of O.  If they see the Beauty books as classic, they’ll go on enjoying them.

One thing I do think: we will see more and more S&M erotica that is consensual; the modern fan wants to believe the victim consents. In the Beauty Books, my beloved characters are all captives, luxuriating in the coercion they endure. It’s a bit of a joke. “He made me do it!” And some don’t find that fantasy useful now. They might want it rough and humiliating and deliciously overwhelming, but they want to believe the victims are consenting, seduced, drawn in. Of course in the Beauty books all my prince and princess slaves really do love it, and don’t want to leave their blessed enslavement, but again, this isn’t palatable so much to modern readers.

SS: How pleased are you with the way your erotica books are being packaged and marketed now days? What do you like? What would you change? And by marketing, I’m including cover designs, sales strategies, sales avenues, publicity, etc.

AR: I want my books to be read. That’s what I’ve always wanted, to know that my books are alive and being read. So I’m thrilled to see Beauty out there in the mainstream market. Thrilled. What would I change? Not sure. I think the publisher has always done an excellent job of publishing these books with dignity and grace. The earliest covers were baroque and very acceptable. Even the recent covers with the nudity (which proved so limiting to circulation) were tasteful and classic. I think my publishers know how to sell these books, I really do. 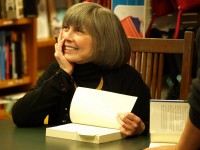 SS: Please feel free to add anything I may have missed.

AR: Writing my erotica was very important to me. I’d read a lot of 19th century Victorian English erotica that was republished in the 60’s and 70’s by Grove Press, and I loved the whole idea of fine erotic writing. At the same time, I felt that women and men weren’t really getting a pure and good erotica that truly reflected their fantasies and what they wanted. Women were being sold cheap women’s romances in which there were only a few really hot pages of the heroine being overwhelmed finally by the handsome pirate or sultan. And men were the target market of a lot of vulgar and poorly written erotica in magazine form. The old Victorian stuff didn’t mix whipping or beating with actual sex.

I set out to write something otherworldly and elegant and deliciously fantastic where men and women could both play passive or dominant roles, and enjoy all the subtle and exquisite pleasures of the S&M motifs, and yet never get into anything dark or horrible.

I think I succeeded. I put a gold frame around Beauty’s adventures. I said to the reader come here and have fun. And it worked. So I’m kind of glad I did it. I had to get that “done” before I could move on. And that the books are still alive today, that they are more widely circulated than ever, well, that is very rewarding.

If you’re interested in reading about real life sex, particularly Americans’ alternative sex practices, please check out my most recent book, Secret Sex Lives: A Year on the Fringes of American Sexuality. Secret Sex Lives has been featured on Katie Couric’s talk show, Katie, and in Salon.

“Although Spencer fondly refers to her interview subjects as ‘my sex freaks,’ it’s her personal journey that really shows just what lovable freaks we all are — whether it’s our taste for leather or our fear of intimacy.” — Salon