In December 2012, I wrote an article for Publishing Perspectives about the current state of the erotica book market. As part of my research, I had the honor of conducting an email Q&A with New York Times bestselling author Anne Rice. Upon my introductory query, Ms. Rice replied, “I never thought I would see the day when my erotica series would make its way into the mainstream….” 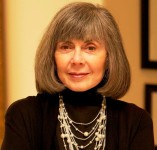 Then, in an impressively timely manner, and over the course of several emails, Ms. Rice proceeded to answer seven questions for me. Due to length requirements, I couldn’t use her complete interview in my Publishing Perspectives piece, but I wanted to share more of it with you. Today, I give you her replies to my first three questions, which comprise her first set of answers. I’ll publish the remainder of our interview in the coming days.

Here is Part I of our interview:

Suzy Spencer: How has your erotica readership changed since Fifty Shades of Grey was published?

Anne Rice: I honestly don’t know the answer to that. I can tell you that the Beauty books have sold well as back list books for years. I added my name to them early on, and they sold well even before that. They always paid royalties, and sometimes pretty nice royalties. It was steady over the years, and plenty enough to support their remaining in print. I think that when Fifty Shades of Gray hit there was a palpable increased interest in all erotica, and talk of the Beauty books, and the sales went up. The publisher noticed. They couldn’t help it. They became interested in a re-issue and that was fine with me.

SS: How have your erotica sales changed in the wake of Fifty Shades of Grey?

AR: In light of Fifty Shades of Grey and the increasing interest, the publishers of my erotic decided to not only republish with new covers but to push for markets which had rejected the books in the past on account of the nudity on the covers, perhaps an unfortunate choice made some years back. They approached Target and Walmart, and were pleased by a good reception, and so the books went out with a big push. The Claiming of Sleeping Beauty made the extended New York Times bestseller list this year and hung on for some time, pulling the other two volumes along with it nicely. And sales have been brisk ever since. Right now the boxed set is on sale at Target. Undoubtedly the new attention will continue to generate much more word of mouth than the books had been receiving quietly over the years.

Book 2 of the Sleeping Beauty trilogy

SS: I realize you probably don’t want to disclose sales figures, but what I’m wondering is with the book so boldly displayed in, say, Target and with Fifty making it okay for people to read erotica in public — I’ve seen many readers proudly displaying and reading the book in public venues — does that mean your current erotica sales numbers are exceeding the total Sleeping Beauty sales figures for all years prior?

AR: Definitely the sales are exceeding the totals of any one prior year. They are bestseller level now. And it’s exciting. And certainly people have changed in their attitudes towards books like these. In the old days, they were a quiet thing, more or less, an underground phenomenon. And they did best when the publisher had them dressed in covers that masked what they were and allowed people to buy them at the cash register and read them on the subway without embarrassment. But now people are entirely upfront about their passion for erotica. They apologize to no one. And this really should not be such a big surprise.

Book 3 of the Sleeping Beauty trilogy

When I first published The Sleeping Beauty trilogy, feminism was not all that kind to S&M erotica. It was passionately concerned with political correctness, and with gaining respect for the liberated woman. Only my gay readers were eager to celebrate the Beauty Trilogy in reviews and articles. For them the sexual revolution was still going on. And I understood that, but it wasn’t a great time to be selling these books. Now we’ve seen a generation of fully empowered and emancipated women, and they have no hesitation about declaring their love of S&M fantasy. They line up to get autographed copies of Fifty Shades of Grey. They enjoy fantasies of all kinds as boldly as men have always enjoyed them. And that is a marvelous development. I have to admit the whole thing caught me off guard. I’d scarcely heard about Fifty Shades of Grey when a columnist was calling me from the New York Times to talk about the Beauty books. Wow.

SS: Sales-wise, what do you see as the future of erotica? Is this a trend that will pass? Or will this “trend” become the sales norm?

You can read “Anne Rice Talks Erotica, Part II,” by clicking here. And please check out my newest book, Secret Sex Lives: A Year on the Fringes of American Sexuality.

For author Suzy Spencer (Wasted; Wages of Sin), it all began with a request she posted in 2005 on Craigslist’s Casual Encounters: “Need to talk about sex…” What began as journalistic research became a full immersion into the nether worlds of sexual encounters, first as a voyeur, then as an emotional participant. Much more than a racy expose, Secret Sex Lives shows us diverse people in real-life situations. A revealing look at touching encounters; a trade paperback and NOOK Book original. Editor’s recommendation.