I Don’t Want To Be This Way

Do you ever say to yourself, “I don’t want to be this way”?

I recently received an interview request from one of my college alumni magazines re Secret Sex Lives: A Year on the Fringes of American Sexuality. That the request even arrived in my inbox stunned me. After all, the school is a devoutly Christian university run by a man who, well, let’s just say he has a very conservative reputation.

And though Secret Sex Lives is, in my opinion, devoutly Christian because it’s told from my born-again Christian point of view and has a message of love and grace, I didn’t think my alma mater would consider it Christian.

So when the interview request arrived I was … well, shocked and honored. I mean really honored — one of my first mentor’s had been the top editor of the magazine and I’d always dreamed of writing for her. Since that never happened, but now I was being asked to be included in the magazine, I guess one could say, too, that my ego was proud. I guess it was too proud because, as we know from Proverbs 16:18, “Pride goeth before a fall,” and now I feel like I’m falling.

I’m getting ahead of myself, again, so let me return to that first email request.

I immediately got a tad wary of the interview request when the emailer, i.e. an editor with the magazine, said she hadn’t read the book. I gave her my publicist’s contact info, and my publicist sent her a copy of the book, forthwith.

Today, I realized the editor’s deadline was nearing and I hadn’t heard from her, so I checked with her.

Not so much to my surprise, but with great hurt to my heart and ego, I got a return email from the editor saying she’d read the book, had “enjoyed it,” but it – and I read I – couldn’t be included in my alumni magazine because of the book’s – and again I read I – “graphic language and subject material.”

Do I need to remind anyone that the book’s name is Secret Sex Lives: A Year on the Fringes of American Sexuality?

Still, I felt like she was saying I was too graphic and I was unacceptable.

I know that’s not what she said. I understand her reasoning for rejecting the book (and me). But what my head knows is having a hard time sinking into my heart. And I really hate that the hurt keeps morphing into anger as I read her additional explanation … that she didn’t think her readers were “ready for such a frank discussion of ‘sex in America.’”

Why does that explanation make me so angry?

Because the whole point of the book is that people aren’t talking frankly about sex. And they’re especially not talking frankly about sex with the ones they love most (and I do love my university). And they’re not talking because they’re terrified that if they reveal their most secret sexual desires that they’ll be judged and rejected – like I was judged and rejected by my alumni magazine.* And because of that very real fear, relationships are breaking. Oh, couples may stay together, but their physical and emotional intimacy is broken.

That’s why I tell people who are in the early stages of relationships, read the book, then share it with the one you love most, read it together, then have a frank discussion about sex.

For instance, if you’re a man, and the only way you can be sexually fulfilled is by wearing women’s silk panties when you have sex, for the sake of your relationship – and for your own self – tell that to your partner before you get 35 years into your marriage. Otherwise, you may end up sneaking around on your partner, chancing diseases (that you’ll bring home to your partner), and chancing losing that partner forever. In other words, you’re not only cheating, your cheating yourself and the person you love most. Think about how much better your life would be if you had someone who loved and accepted you and your sexual desires, just the way you are. 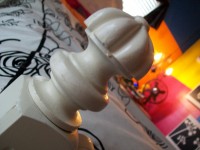 If you’re a woman, and the only way you can get turned on sexually is to tie your partner to the bedpost, then you need to be upfront about that. Otherwise, you may end up sneaking around on your partner, chancing bringing home diseases, and chancing losing that partner forever. You’re cheating yourself and the person you love most. Think about how much better your life would be if you had someone who loved and accepted you and your sexual desires, just the way you are.

Yes, I know, you don’t want to chance judgment and rejection, i.e. losing the one you love most, by being so honest. I understand. I chanced it myself by writing honestly about my own thoughts, feelings, desires, beliefs, and sex life in Secret Sex Lives. And it has hurt. But it has also given me the greatest reward of my life in that the very person who is most important to me, who I most feared hurting, shaming, embarrassing, and rejecting me, has had the completely opposite response. That person has literally shouted to others, “I am not embarrassed or ashamed. I am proud of Suzy.”

Those words are much, much stronger than what feels like rejection from my alumni magazine. Thank God. And thank God it’s okay for me to be the way I am.

*For the record, the alumni magazine is not affiliated with the university, and the university journalism department invited me to come speak to their students. The department promised me that their offer would not be rescinded, and they kept that promise. On February 15, 2013, I spoke to approximately 100 of my university’s journalism students. It was a fabulous day.

You can purchase autographed copies of Secret Sex Lives through Brazos Bookstore.