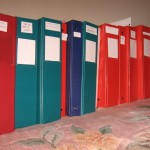 A few of my sex source emails.

Over the past eight years, I have traded almost 17,000 emails with men and women throughout the United States who have secret sex lives like that of former CIA Director David Petraeus and his biographer Paula Broadwell and possibly Gen. John Allen and Jill Kelley, who received rebuking emails from Broadwell for her behavior as Kelley strolled MacDill Air Force Base in Florida, and FBI agent Frederick Humphries, who emailed Kelley shirtless photos of himself.

Though Allen and Kelley deny any affair and the Humphries photograph is described as a joke picture, the circumstances around this sex scandal are not unusual, even when it comes to the military. In fact, as I researched my book Secret Sex Lives: A Year on the Fringes of American Sexuality, I learned that the very way Petraeus and Broadwell communicated through an email account that was filled solely with drafts, no sent emails, but an account that both could access and read, is exactly the way “Phil,” one of my married military sources, communicates with his swing partner “Phoebe,” a woman who is not his wife but with whom he has an intense emotional and sexual relationship as they pursue and have sex with other couples, too.

And the way Broadwell rebuked Kelley is similar to the way Phil has rebuked fellow soldiers he’s spotted on swinging websites – men who posted photos of themselves, in uniform, as they searched for swing partners. As for the shirtless photo the FBI agent sent Kelly, that too is similar to what I received from my sex book sources – an unsolicited photograph that seemed benign, eventually followed by another unsolicited photo of the man’s most intimate body parts. 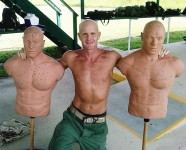 One of those benign shots followed by a penis photo came from a career Navy man who had a girlfriend, but who frequently received sex from men. In fact, I communicated with many heterosexual men, usually happily married, military veterans, who either received sex from men – without their wives’ knowledge – or yearned to have sex with men.

But in the world of alternative sex, the military is renowned for swinging, i.e. partner swapping. Reputedly, swinging began in the Air Force as pilots promised to take care of their buddies’ wives, while the friends were away on mission.

Phil, my swinging military man, first learned about the “lifestyle” – as swinging is also known – when he discovered that several of his unit members swapped partners.

(For the record, adultery is a crime under the Uniform Code of Military Justice, but swingers don’t consider swinging adultery, because – by definition – swinging is done only with the knowledge and consent of one’s regular partner. So if the husband or wife knows about the sex, they reason, it’s not adultery.)

Phil’s wife, however, eventually stopped swinging. Phil didn’t. Instead, he continued in the lifestyle with Phoebe, a nurse he met at a private swing party. Phil now lives a dual life. He is the powerful career military man and devoted husband in one world. In the other, he is a swinger with Phoebe, a woman he considers his soul mate, a fact that he keeps secret from his wife.

So why do men and women – particularly men and women in positions of power, who seemingly have everything and who proclaim they dearly love their marriage partners – chance it all for secret sex?

For most of those I interviewed, they said they needed something “more” and often that more wasn’t available at home. Sometimes it wasn’t available because partners had grown apart due to the demands of life – children, careers, constant travel and separation, physical decline, or elderly parents.

In those cases, the need for “more” could be as simple as the need for the physical act of sex or it could be as complicated as the need for physical and emotional intimacy. In the latter instance, often the “more” wasn’t available because the partner was too ashamed or embarrassed to admit his or her deepest, darkest sexual desires and needs to the one he or she loved the most – desires for swinging, needs for same sex sex, or needs for something kinkier, such as cross-dressing or bondage, domination, and sadomasochism. So they searched outside of marriage for someone who would hear them, acknowledge them, appreciate them, and accept them, kinks and all.

For many of my military men and women, as well as nurses, police officers, fire fighters, and 9/11 survivors, their close relationship with death was why they needed more. They knew too intimately that life was short so they desperately wanted to live it to its fullest – to see it, touch it, feel it, and try anything and everything before it was too late. It was their way of holding on to life.

Tell me what your way is. How do you hold on to life? And how do you fulfill your need for physical intimacy? For emotional intimacy? Or do you even need either?