I’m speeding down the road. I’m about to hit something. What? Hell if I know. I can’t see it. All I know is that I’ve got to hit the brakes NOW. I try. I can’t. My foot is stuck under the floormat. I can’t edge my foot forward. I can’t slip it backwards. I can’t turn it left. I can’t turn it right. Then, I wake.

That’s been one of my recurring dreams lately. Maybe I dreamed it this past weekend because I was at the Texas Mountain Trail Writers Conference and after the conference’s opening night mixer in Alpine, and while we were driving back to the conference site at Mountain Trail Lodge in Fort Davis, I turned to my left to listen to one of the conference attendees, when SLAM – the woman driving the SUV we were in stomped on the brakes. We just missed hitting an elk.

Or maybe I dreamed it this past weekend because when I gave a Saturday morning talk about writing, I launched into my usual spiel about the importance of opening a book with a KABOOM, which I usually describe as an eighteen-wheeler crashing and exploding into flames. I always try to explain that the KABOOM can be external – like an eighteen wheeler crashing – or internal – like a crash within the heart.

For those of you who may have been wondering why I haven’t posted a “real” blog post in so long … well, it’s been crazy ’round here – crazy good.

Since my last “real” post in April, as I said above, I’ve been to Fort Davis, Texas, where I was a presenter at the Texas Mountain Trail Writers Conference. After that is when I started the blog post above, which I never finished, because, well, it’s been crazy ’round here. So crazy that I stopped writing in the middle of a word.

So let me go back and continue from “spee” and fill you in in a much calmer voice.

The Texas Mountain Trail Writers conference is an intimate conference for only 40 writers and three presenters, and every writer and every presenter attends every session. It’s fabulous. Where else can you go and nearly hit an elk while driving – okay, I was riding – from Alpine to Fort Davis?

But the best part, besides fabulous food and making some wonderful new friends, was sitting under the stars listening to Western novelist Mike Blakely sing his cowboy songs while strumming his guitar. The 14-hour round trip drive was worth it just for that. Besides, Mike’s not bad to look at, and he tells great stories and has a sly sense of humor.

Unfortunately, during the conference R&R times, I didn’t get to visit with the participants as much as I wanted, because I had to speed away and hide away in my cabin and work on the Secret Sex Lives copy edits. My publishing house, Berkley Books, a division of Penguin Press, and I – do I dare say we’re speeding toward? no – we’re really gearing up for the  October 2, 2012 publication of Secret Sex Lives.

That’s why I felt like I was speeding down the road with my foot stuck under the floormat and unable to hit the brake. Well, that and the fact that while juggling copy edits, I was trying to finish a screenplay that’s past due and needing to work on one of my coaching client’s manuscript for which she’s been beyond patiently waiting and, and, and …

I’ve had some lengthy phone meetings with the Penguin publicity team (there’s already some good news to be revealed at the appropriate time) and we’ve exchanged countless emails. We’ve created a Facebook author page. (Check it out to see hints of the Secret Sex Lives back cover, and believe me, you WILL want to read the back cover.) We’re creating a fun marketing tool that I can’t wait to give away, we’re starting to build a completely new Suzy Spencer website, and we’re scheduling book signings. The first will be Thursday, October 4, 2012, at BookPeople in Austin, Texas.

But even before that, on Saturday, June 23, 2012, to be precise, I’ll be doing a Q&A at the Writers’ League of Texas annual agents conference where I’ll answer questions about Secret Sex Lives. The title of the Q&A? “Look, Sigh, Lick.”

In addition to that, many of you know that Investigation Discovery (ID) network has been frequently running one of its newest shows, Deadly Sins. I was honored to be a part of the premiere episode, “Carnal Appetite,” which dealt with the murder of Regina Hartwell, i.e. my book Wasted. I will be forever grateful to producers Sharlene Martin and Van King for giving Regina a few minutes of national fame. Regina always wanted to be famous, and through Deadly Sins, I pray she’s getting at least her 15 minutes.

I believe I’d be a biased journalist, though, if I didn’t state that one of Regina’s friends objected to the episode and told me that Regina would not have wanted to have become famous in that way.

In case Regina would have, please note that the “Carnal Appetite” episode of Deadly Sins will air twice more June 18, 2012.

And I’d love to know what any other friends of Regina’s think about Regina and Deadly Sins. 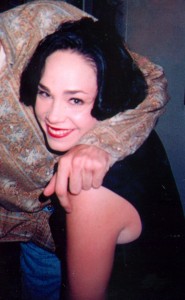 Regina Hartwell, not long before she was murdered

Now, since my life is still speeding along at a crazy and terrifying pace, I’d better stop writing this and get back to that screen–