In 2001, when I first started covering the story of Andrea Yates, the Houston mother who drowned her five children, I read every article on the case I could find.  I thought the most touching writing came from a reporter for the Los Angeles Times. I contacted her to tell her how beautiful and emotional her work was.  If I recall correctly, I told her she should be the one writing the Yates book, not me.  Her writing was so moving that I knew she was a much more talented writer than I.  She begged off saying she didn’t like covering the story.  If I remember correctly, she said she preferred covering war.

More than nine years later, after watching the last mine rescuer in Chile safely return to the surface (yes, I mean mine rescuer, not rescued miner), I found myself combing through unread emails, including my daily update from Publishers Lunch.  “We posted another 35 new deals yesterday at Publisher’s Marketplace,” I read, “among them: Journalist Jonathan Franklin’s inside story of the trapped Chilean miners…”

At that, a bit of sadness washed over me.  I was sad because we were already commercializing such a rare, beautiful victory.  Couldn’t we just savor it in our memories for a while before committing it to commercialism?  Of course, I have no right to feel that way; I was part of the commercialization of Andrea Yates and her five murdered children.  And maybe Jonathan Franklin is like me.  Maybe he didn’t pursue the story.  Maybe, like me, he was asked to write it.

I know I had qualms about writing the Andrea Yates book.  I remember discussing it with my family.  They told me, “Someone’s going to write it.  Why not you?  You’ll handle it with more sensitivity.”  I hope I handled it with sensitivity.

I drew myself away from Mr. Franklin and continued reading Publishers Lunch.  “National Book Award Nominees Avoid the Predictable…”  I barely glanced at the fiction nominees and focused instead on the nonfiction list, briefly wondering if, briefly dreaming that, my sex book could gain such esteem.  I knocked that embarrassing thought out of my head and kept reading: “Patti Smith, Just Kids (Ecco) … Megan K. Stack, Every Man in this Village is a Liar: An Education in War (Doubleday)”.

I stopped.  Megan K. Stack. That name sounded so familiar.  Then, I thought I knew why.  I Googled Megan to make sure.  Yes, she was that great LA Times reporter who had covered Andrea Yates with such respectful, touching power.  I’d had no idea how young Megan was when she was covering that case — 25 years old.   At that, I was even more in awe of her talent.  I then went to Amazon to read the opening sentences of her National Book Award nominated book.

This memory from childhood is still there: the voices of the adults bounce fretfully, eternally in rooms that have since been sold or abandoned.  Beirut, they said, never Lebanon.  John was in Beirut.  All meaning fit into those words.  His barracks had been blown up, but he had survived. 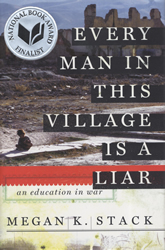 John the drinker, the smoker, the apprentice in three-card monte and hanger-out with New York street cons; his face cut by light, arms angled in salt air, his imprint lingers still in corners and amber edges.  John was my father’s cousin, my godfather’s brother, our two Irish Catholic families braided together in city blocks, in the Bronx, by marriage and the crosshatches of godfathering.  He was adrift between the generations of our family, too old to be a cousin and too young to be an uncle, but still unmistakably one of us, with us in churches and cramped living rooms and summers on the beach.  In my earliest memories I waddle in his retreating shadow, arms in the air and begging, “Johnny! Uppy!”  And then this skinny street hustler sweeps me into the air to swing on the rim of centrifugal force until the salty, sunny world swims.

As I first read Megan’s words, I thought, oh, my, she still has that ability to paint power with a few, simple words.  As I typed Megan’s words, I remembered my days working in New York City.  I was a researcher for Fortune magazine, just a bit younger than Megan when she’d covered Andrea Yates.  Often, I spent my lunch hour touring the Museum of Modern Art.  There I watched struggling artists – the same age as me – sitting on uncomfortable black benches, sketching the Masters, trying to learn from the best.

More than 30 years later, I too am trying to do that – learn from the best.  I’m reading memoir after memoir, including Megan’s, trying to figure out what they’re doing right and I’m doing wrong.  And the reason I’m doing that is embarrassing.  My sex memoir, the one that I previously bragged was the best book I’ve ever written, has been returned to me for rewrite, again.

It’s painfully shaming to admit that a book I’ve been working on since December 2004 isn’t of publishable quality.  How good of an author can I be if I – a professional writer since 1976, an author of four books including one that has New York Times best-seller on the cover – can’t get a manuscript accepted after more than six years of trying to perfect it?

Yes, admitting that is embarrassing.  In fact, I started writing this “embarrassing” blog post in September, continued trying to write it in October, pushed it aside and tried to forget it forever in November because a friend had said I shouldn’t publicly admit my rejection.  I understood why – people want to be associated with winners, not losers.

But I decided to write the post and publish it anyway because, well, I’m tired of hearing, “I can’t wait to read your sex book this summer,” with me replying, “It won’t be out then.”  And I’m tired of hearing, “When’s your sex book coming out?” and me mumbling, “God knows when, if ever.”  But most of all, I’m writing this because I need to for me.  I can’t seem to move forward on the rewrite until I confess my sin of … failing.

I know I have some terrific friends and fans out there who will say, “Suzy, don’t say that.  You haven’t failed.  You’re not a loser.”  I appreciate that kindness and support.  I really do.  And I have a small fantasy that by admitting this publicly that there will be at least one struggling person out there who will be inspired to keep working toward achieving their …well, whatever they’re pursuing, because I know that I will keep writing and rewriting this manuscript until I get it right.

I also know that one of the reasons I’m having such trouble with this memoir is because – like the Yates book – I have qualms about writing it.  But as I tried to handle the Andrea Yates case with sensitivity, I will try to handle myself with sensitivity too.  And God willing, I’ll succeed.