The Reporter and the Ginger Farmer

Who would have ever thought that researching and writing a book on sex in America would result in a life-changing business trip to China?  Certainly, I wouldn’t have, but it did.  Alas, I don’t have time to tell you about it right now because the trip put me severely behind in my sex book rewrite.  In fact, it’s nearly 10 o’clock at night and I haven’t met today’s minimum page count, which is imperative to do because my August 1 deadline is non-negotiable.  So, I need to get back to the book.

In fact, since I am so behind in rewrite, my planned one-month blogging hiatus is going to have to change to a two-month hiatus.

But I will tell you this tidbit of info because it explains the title of this blog post and the photo below:

I met some businessmen from Hong Kong who have a company that grows, processes, and sells organic ginger.  They joked that my trip was going to result in a novel about a reporter who meets and falls in love with a ginger farmer.  Then they drove our little entourage  into the mountainous farmlands of China where we walked through their leased caves storing their fresh ginger.  As we emerged from a dark, chilly, spider-infested cave into the Chinese sunlight, I saw a tall, lean Chinaman in a navy blue shirt and wearing a coolie hat.  He was the owner of the ginger caves and a farmer, too.  I wanted a picture of him, so I had my traveling companion stand where it looked like I was taking a picture of my friend, but was really photographing the farmer.  But when the farmer grinned and scooted into frame, I realized he wanted his photo taken.

Unfortunately, just like now, I was in rush.  We had another cave to tour.  So I drew down my camera, and we hiked through the farmer’s fields of peanuts, walked through another cave, and hiked back down the mountain.  As we walked, I told my companion that I wanted him to take a picture of me with the farmer.  But when we returned, the farmer wasn’t there … at least not at first.  Then I saw him literally trotting toward us.  I smiled, and I laughed.  He’d changed from his navy blue shirt into a white shirt that matched mine.  We stood next to each other, and my friend took our picture.  When I saw it, I laughed again.  Notice that we aren’t simply wearing the same color of v-neck, knit shirt, we’re tilting our heads the exact same way, too.  Maybe the reporter and ginger farmer are meant to be … or are at least meant to be another book.  🙂 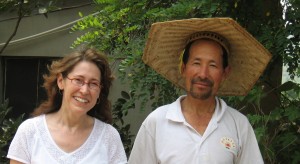 The Reporter and the Ginger Farmer