As many of you know, the making of the sex book has been a long and trying process.  I started the book in December 2004.  For the next year and a half, I researched, reported, wrote, rewrote, rewrote, and rewrote the book’s proposal.  The research continued through 2007.  During those years, I traveled from Texas to New York, Connecticut, and New Jersey to California, Nevada, Arizona, and New Mexico to Florida, Jamaica, and Mexico, and ofttimes I traveled to those places more than once. 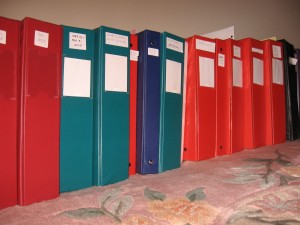 A few of the year 2005 sex source emails

I’m sure I’ve interviewed well more than 100 people in person and hundreds of people via email.  More than 1100 people from every state in the union, and a few foreign countries, answered my sex survey, which is still up and open at suzyspencer.com.  And though I’ve never really stopped researching, indeed, I’ve stayed in contact with some of my sex sources for more than five years, in 2007 I sat down and focused on writing the actual book.  Finally, May 1, 2009, I turned in a 600-page manuscript.

In January 2010, Denise Silvestro, who is my editor at Berkley Books, and I started talking about rewrite and publication.  We both knew that 200 pages had to be cut.  Over the next few months, she began sending me her suggestions for those cuts, as well as other thoughts about the manuscript.  In April, Denise emailed me her final set of editorial notes and we agreed on a rewrite deadline and publication date – August 1, 2010 deadline, summer 2011 publication.

That’s my first big news – after six and a half years in the making, the sex book will finally be on the bookstore shelves the summer of 2011.  I am psyched and stressed about this.  I’m psyched because it will be the first new book I’ve had on the shelves since December 2004.  I’m psyched because, in many ways, this was – and is – the most difficult book I’ve ever written.  Why do I get psyched about a difficult book?  Because it stretched me as a writer and as a person.  The reporting experience took me into worlds that I never fathomed I’d go into.  Sometimes those worlds were a tad frightening and intimidating; frequently they were – and are – confusing.

But this hasn’t been simply one of my most difficult books, it’s been one of the best reporting experiences and perhaps the more rewarding writing experience of my life, too.  Along the way I’ve met some wonderful people who have encouraged me, inspired me, and changed me, in part because they have been my friends in the truest essence of the word – they love me and accept me despite our differences.

Now the hard work is in front of me – the discipline of cutting, rewriting, delving deeper into the soul and revealing that on paper.  That’s not a task I cherish.  In fact, it frightens me a lot more than walking into a swing club with a man I met only a few minutes before.

Since the rewrite is going to take the majority of my time, energy and spirit, for the next few months I’m going to have to limit my coaching.  I will continue with my current clients.  I might take on one or two new ones, if I really believe in them.  And I will be available for one-hour consultations to help authors prepare for the Writers’ League of Texas annual agents conference.

But, and here’s the second big news, the best option for writers who want to work with me over the next few months is to sign up for my True Kick in the Pants class offered May 22, June 5 and 12, through the Writers’ League of Texas.  This is a shortened version of the week-long seminar I taught a couple of years ago for the Writers’ League’s Summer Writing Retreat held each year at Sul Ross State University in Alpine, Texas.  That class was aimed at the serious narrative nonfiction writer prepping a book and proposal.  In contrast, this class is geared to both fiction and nonfiction authors who want to polish their first 50 pages in preparation for the agents conference.  As the class description says:

Through critique and encouragement, we’ll discuss story, hook, and pacing, as well as self-editing. We’ll delve into topics like self-talk, discipline, determination, how to take criticism (constructive and otherwise), and how to bounce back and keep up one’s confidence no matter the circumstances. Making it as an author is about the craft of writing, but it’s also about self-confidence and marketing–knowing who you are as a writer and how to express that to others so that you’re completely prepared to meet agents and editors.

The class is focused on the first 50 pages because that’s what agents usually ask to see, before requesting for the complete manuscript.

So join me for the WLT class.  Send me some good luck for the rewrite.  And – and maybe this is my third bit of big news, though I think I’ve mentioned it before – look for the December 2010 republication of my true crime book Wages of Sin.  Perhaps it’s appropriate that Wages of Sin is being reissued just before the sex book because I always describe it as the story of the Southern Baptist killer stripper – a girl who was reared Southern Baptist, became a stripper, and then a killer.

Yep, these days, this writer is always thinking about sex.  Maybe that’s not such big news after all.  🙂 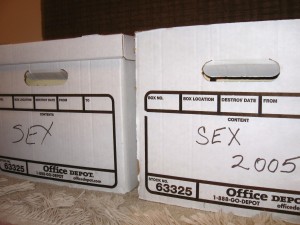 Some of the sex research and interview notes from year 2005