When I was a kid at summer camp, in order to get dinner, we had to create marching routines.  We’d rehearse our routines, march to the chow hall, perform our drills, and be judged on them.  Only then were we allowed to grab our military dinner trays and eat.  On the first night of camp, it was usually a simple routine as 12 barefoot girls would line up in rows of two, arms length apart, and march to the chow hall calling, “Left.  Left.  Left, right, left.”  We urged our voices as deep as schoolgirls could go.

As the camp term wore on, we morphed into lyricists and choreographers creating unique songs accompanied by elaborate maneuvers.  When we marched, we were part drill team and part chorus line dressed in faded cut-off jeans and t-shirts, usually with a pocket over the left breast.

There are two things I remember most about those marching drills.  First, I never could get in sync with my cabin mates.  While they were calling, “Left.  Left,” with their bare left feet hitting the hot pavement in perfect beat to the word left, my right foot was hitting the pavement, then stumbling over a stray pebble of granite, or my left foot was hitting the pavement two milliseconds after theirs.  To say I have no sense of rhythm is an understatement.

Yet, the second thing I remember is the bellowing rhythm of “left, left, left, right, left.”  It is so engraved into my memory that 40 years later I would hear it in my head as I walked the outdoor track at my old gym.  “Left.  Left.  Left, right, left,” and I stumbled over a chunk of cedar bark.

But, no!  I couldn’t be thinking about summer camp and the way granite smells when it’s heated in the sun.  I couldn’t think about the sound of the motorboats as they skipped over the water, the rhythmic chirps of crickets in the late afternoon, or the chit-chit-chit of the water sprinklers on the Saint Augustine grass.  I needed to be thinking about SEX!  I had a sex book to write.

I always wondered what the male joggers thought as they passed me.

No, I only wondered for a split second because I was trying – forcing – myself to think about sex.

As many of you know, I turned in the first draft of that book on May 1, 2009, which was a little over a year after I switched gyms.  There’s no track at my current gym, and now I’m back to trying – forcing – myself to think about sex because my editor has sent me her notes on the first two-thirds of the sex book.  They aren’t horrible notes.  In fact, I like them.  There’s a part of me that is so psyched and – do I dare say – excited to get back to working on the sex book.  But when it comes right down to it, I can’t seem to do it.  I’ll do anything other than think about sex.  I’ll write this blog.  I’ll vacuum.  I’ll even iron, which I hate doing.  I’ll go outside and pull weeds, and believe me, there are enough weeds to keep me pulling until next fall.  I’ll even work on my taxes … because that HAS to be done.

And still, the sex book sits on my desk – the first 230 pages printed out, my editor’s notes laying on top of them.  I glance at them and read:  “I think the main narrative of the book definitely starts in the right place with you talking about your …”

Ah, this is good, I think.  I can do this.  I turn on the computer, check Facebook, pull weeds, check Facebook again, and pretty soon it’s time to go the gym.  My new gym is small, intimate even.  Though the trainers and I sometimes quietly joke about sex, they don’t have me constantly thinking about sex like I need to.  And it’s too small of a gym to be pushing my feet against the footplates of the elliptical trainer while calling out, “Sex.  Sex.  Sex, right, sex.” 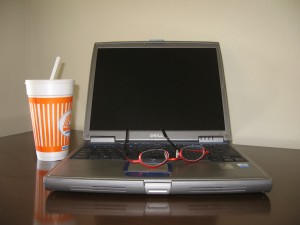