The Bird and the Cat(tiness)

Sarah Bird lifted her right hand into the air as if she were holding a silver tray of hors d’oeurves, thrust her pelvis toward the audience, lowered her make-believe platter to hip level, and said, “May I offer you an ovary?”  The audience roared with laughter.

I hate using clichés like roared with laughter, but whenever Sarah walks into a room, there’s a roar, usually a rushing roar of fawning, followed by laughter.  Her cult of fans feels honored just to be in the room with her.  They’re so enamored that they’d laugh if she bought a box of Girl Scout cookies, and they’d be right to laugh.

Sarah could turn buying a box of cookies into a Texas Monthly column that has one smiling while reading it, and maybe even chuckling aloud once or twice.  Then, one would laugh so hard and loud that one would miss half of the best lines if they heard her read the story.  That’s because Sarah doesn’t simply read her words; she acts them out.  Hence, ovaries thrust into the audience’s faces.  In fact, her ovary line was from a Texas Monthly piece she’d written about attending a high society event in Houston.

For those who may not know Sarah, she is a mega-star writer in Austin, a star writer in Texas, and a respected writer elsewhere, despite the fact that early in her career she wrote romance novels.  Now she’s known for her back page column she used to write for Texas Monthly and her literary novels.  In my opinion, not all of her recent novels are literary.  In fact, I think her most recent book, How Perfect is That, is downright commercial fiction. 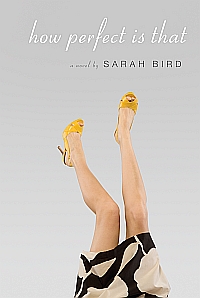 Anyway, I digress … as I usually do.  I’ve known Sarah for years.  She and I were two of the original members of the now gone-by-the-wayside Chick Writers group.  Or was it Writer Chicks?  I can’t remember.  I just know that we usually got together for bad pancakes at Kerbey Lane Café and better huevos at Curra’s Grill.  My preferred meeting was for wine and, dare I say, hors d’oeurves at Fonda San Miguel.  (Can one have hors d’oeurves in a Mexican restaurant?)  In fact, it was there that Sarah and Writer Chick Carol Dawson suggested a huge change in my sex book, a change that my editor later asked me to make.

Having said all of that, Sarah and I aren’t close enough friends that I’d call her up and say, “Hey, Sarah, I have a flat tire, and I’m three blocks from your house.  Can you come give me a lift?”  But we’re good enough friends that she’ll introduce me to a group of librarians, bother to notice that they don’t recognize my name and are somewhat dismissive of me, and good enough that she’ll then add, “She’s a New York Times best-selling author” so that they’ll begin to ooh and ah over me a bit.

So, on a cold, stormy night, I jumped in my car and drove 10 minutes to attend a Sarah Bird reading/performance.  I did that because it’s rare for a writer to come out to the boondocks where I live, and I want to encourage more of that.  I did it because it was a cold and stormy night and I feared attendance might be poor, so I wanted to support a friend.  And, I wanted to watch and learn what makes Sarah such a success.

Let me back up here and give you an example of her success.  When Sarah comes out with a new novel, the movers and shakers of Austin throw parties for her in their homes, which, of course, are located in the most exclusive neighborhoods of the city.  Hundreds of people turn out for these parties.  One such event was sweat-dripping humid.  Still, name musicians, award-winning writers, influential editors, at least one multi-millionaire celebrity business couple, and a camera crew crowded the home of a local socialite.  A line of people, juggling armfuls of Sarah books, wound through several rooms, waiting to get her autograph.  I stood in that line, salty dampness wrinkling the cover of the one book I clutched in wet palms.

Lord, I stood in that line for at least two hours, and as the miserably hot time eked by, I watched a woman holding at least a half dozen books gradually maneuver and manipulate her way into the line and then in front of me.  So I glared at her.  She glared back … with a don’t-you-know-who-I-am look oozing from steely hot, condescending eyes.  This perspiring paperback peon true crime writer wasn’t going to back down.  I kept glaring.  Then I angrily tapped my toes as Sarah signed the woman’s half dozen books. 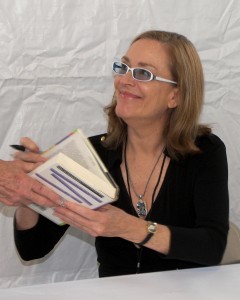 Finally, I got up to Sarah and said, “Who’s the bitch who cut in front of me?”

Sarah politely smiled.  “Don’t you know who she is?”

I snapped back something like, “Obviously not, but she sure as hell looked at me like I should know.”

Sarah explained that the woman was the attorney handling the divorce of Austin’s most famous, successful, and richest professional athlete.  I thought, “Big—”

Well, I’m not going to tell you the words that went through my head, because they’re not exactly polite.  But I will say that I didn’t give a hoot about that lady and her divorce abilities because I’m not married, never have been married, don’t intend to get married, and if I did marry, chances of me marrying and divorcing a multi-, multi-, multi-millionaire and needing an attorney of that woman’s self-importance are … zero.

Why am I rambling about this and exposing my cattiness?  Because it has to do with another reason why I came out in the cold rain to hear Sarah.  When I got home from that party and read Sarah’s highly entertaining How Perfect is That, I was stunned.  In my opinion, the book makes fun of the very so-called high society people who throw Sarah such extravagant parties, the very people who clamor to be in the same room as she and boast that they’re friends.

I even talked to my friend Carol Dawson about this because Carol’s good friends with Sarah, not a friend/acquaintance like I am.  I said, “Are these people so stupid that they don’t know Sarah’s making fun of them?  Or are they that desperate for their fifteen minutes of fame that they don’t mind being made fun of in a book?”

(Obviously, these people are never going to throw me a party — not after what I’m saying here.)

Carol protested, oh, no, Sarah’s not making fun of them.

I don’t really remember what else Carol said after that because I tuned her out since I thought she was so very wrong.  I think she said something like Sarah was honoring them, and Carol may have pointed out how these rich, society women truly are Sarah’s friends and helped Sarah research her book.  I do know that I had noticed that Sarah had thanked them in the acknowledgements of her book.

What does this have to do with why I drove out on a cold rainy night to hear Sarah?  I wanted to learn how she does it – how she woos and wins people who, I think, she’s making fun of.  How people who are so very different from her – often hardcore Republicans to her flaming liberal points of view – love her, worship her, and support her.  After all, on this cold, rainy night, she was about to perform in a solidly Republican neighborhood.  She even whipped out her ink-stained left palm and read notes from it, a mocking salute to palm-cheat sheet reading Sarah Palin.  The women in the audience roared.  One obviously Republican man was not as enamored, though he did eventually come around.

I also wanted to learn how Sarah transformed herself from a romance writer to a respected writer of literature.  So I sat in the back of the room with a middle distance curiosity, jotting black ink notes, not on my hand, but on a pale yellow flyer.

“Works crowd before reading,” I wrote.  While the audience filtered in, Sarah started going row by row, shaking hands, and talking to everyone.  It was a much bigger crowd than I’d expected on a bad weather night, proof of Sarah’s cult following.  Then, she realized she’d forgotten her notes.  She charmed the crowd by admitting that and running out the door, to her car, and back again with her notes.  Finally, she began her reading, the aforementioned Texas Monthly piece and the opening chapter of her next book, which won’t be out until 2011.  The audience loved that because it made them feel like they were being allowed a peek at her work in progress, something that only the most intimate of friends are allowed, even though she’s been reading it publicly for months.

From the podium, she asked the audience questions, involving them, interacting with them, listening to them.  Listening.  That’s a key to great writing.  Apparently it’s a key to creating a cult of fans, too.  I’m guessing Sarah got this ability to schmooze strangers from being a military brat who constantly had to make new friends.  I’m also guessing Sarah transformed herself from romance writer to respected writer of literary novels by believing in herself.  She is a woman who always appears to be in control – of herself and the room.

Oh, I don’t know.  I don’t know that I came away from the evening with any answers to my questions.  All I know is that Sarah’s adulation and success seem to owe as much to her personality and marketing talent as it does to her writing talent.  And I don’t think that’s a bad thing.  In fact, I think it’s a smart thing.  I love smart writers.  So, maybe I’ll join the Sarah Bird cult.  Maybe I’ll practice that silver platter, thrust your pelvis, may-I-offer-you-an-ovary move to promote my sex book.

Nah, I’ll leave that to Sarah. 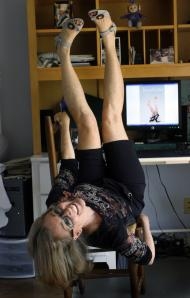