Hear that tapping?  It’s my fingers … as I wait … and wonder … when my editor is going to call.  This is what it’s like for writers … waiting.  Even published writers.  Wondering.  Maybe it’s not that way for writers like Nelson DeMille.  But for those of us in the middle, it’s tapping fingers … anxiously waiting … maddeningly waiting.

My editor was supposed to call me on February 1.  She didn’t.  I let it slide.  Previously, she’d said she was going to send me editorial notes in five weeks.  In five weeks would have been February 16.  Now it’s more than seven weeks.  She emailed me yesterday and asked if we could we talk today.  That made me nervous … that she wanted to talk … rather than just email me her notes on the sex book I’m writing.  I’m not the type of person who likes to talk on the phone.  I’d rather do email … or do lunch.  But considering she’s in New York and I’m in Texas and I’m not Nelson DeMille …

Today, I ate a half of a peanut butter and jelly sandwich standing by myself at my kitchen counter.   Well, I wasn’t actually alone.  My nerves were with me.  I ate the sandwich 20 minutes before my editor was supposed to call so that I’d have the energy to clearly focus on every comment she made.  Now I’m hungry for dinner.  Now I’ve gone from anxious to angry.  I’m not angry at her.  I’m angry at someone else … a man who emailed me and told me he hadn’t answered the multiple emails I’d sent him in January because he didn’t think they were intended for him.

I wrote him back that if I hadn’t intended them for him I wouldn’t have sent them to him.  He hasn’t responded.

Neither has my editor.  I phoned her.  Her assistant said she’d see if she was available.  As I waited, I clicked through my emails.  That’s when I found the one from the man who said he didn’t think my emails addressed to him were intended for him.  I also found a frantic sounding note from my editor saying she was running late and asking if she could call me “in a bit.”  That was an hour and 33 minutes ago, not that I’m counting.  Her assistant came back on the line and said my editor would call me in a few minutes.

I need to remind myself that New York time is different than Texas time.  I learned that when I lived in New York.  They may move fast and talk fast, but when it comes to business, boy, do they ever move slowly.  In Texas, we do business fast; we just walk and talk slow.

I told the assistant to let my editor know that I wasn’t trying to rush her, that I’d just found her email saying she was running late.  Then I answered the email from the man who thought my emails addressed to him weren’t to him.  Then I swallowed back a Bayer aspirin because my heart was starting to ache.  And now, I’m still waiting.  At least now my fingers are tapping on the keyboard rather than simply on the desk … or in my mind.

But in my mind, I hear Edgar Allan Poe:

Once upon a midnight dreary, while I pondered weak and weary,
Over many a quaint and curious volume of forgotten lore,
While I nodded, nearly napping, suddenly there came a tapping,
As of some one gently rapping, rapping at my chamber door.
`’Tis some visitor,’ I muttered, `tapping at my chamber door –
Only this, and nothing more.’

Yes, I hear The Raven in my head.  I don’t think I’ve thought about this poem since eighth grade.

And the raven, never flitting, still is sitting, still is sitting
On the pallid bust of Pallas just above my chamber door;
And his eyes have all the seeming of a demon’s that is dreaming,
And the lamp-light o’er him streaming throws his shadow on the floor;
And my soul from out that shadow that lies floating on the floor
Shall be lifted – nevermore!

For some reason, Poe’s rapping, tapping words calm me, though I don’t understand why.  It’s now 6:07 PM in New York.  It’s time for my editor to go home from work.  And still I wait.

My Facebook friends know how this story ends.  But I’m going to fill in some of the details anyway.  I want my non-writer friends to get an idea of what a writer’s life is really like.  On second thought, maybe it’s better not to tell you so that you’ll create a glamorous fantasy for me.  Non-writer friends, quit reading now!

Published writer friends, you too have to stop reading now.  I want to maintain some semblance of success in your eyes.  Then again, you probably know my truth.

Non-published writer friends, keep reading so that you’ll learn the realities of this business.

At 6:08 PM in New York, the literary agent who sold the sex book emailed me and asked how my phone call with my editor went.  At 6:16 PM, I told him it hadn’t gone.  I won’t tell you everything else that I said or he said, but I will state that he told me to try to make another telephone appointment with her.

So, I stopped cutting and pasting the lines:

And my soul from out that shadow that lies floating on the floor
Shall be lifted – nevermore!

And I started typing an email.

“Since it’s 6:25 PM in New York, I’m guessing we’re not having our phone meeting today.  Can we make a firm appointment for tomorrow?  Or … I can continue to wait here by the phone this evening … it’s just whichever works best for you.  I’m just eager to get this rewrite done and provide you with a great manuscript.”

“Eager” is a weak word for what I feel about completing this book.  But at that moment, I wasn’t thinking about that.  I was obsessing over striking a firm but respectful tone, unlike with the man who had thought my emails to him weren’t for him, while debating in my mind whether – after hitting the send button – I was going to rush to the gym or to my mother’s house to cope with my anxiety.  Weight lifting v. roast beef dinner with the family.

The clock on the computer still read 6:25 PM in New York when I did hit send, and just as I did, my phone rang.  Caller ID simply said, “New York, NY.”  I let the phone ring twice before answering.  Yes, it was my editor.

We talked for 26 minutes and 25 seconds, not that I was counting.  (I really wasn’t.  I just read the timer on my phone right after I hung up.)  Again, I’m not going to confess all the details.  That’s between my editor and me.  Besides, I don’t want to tell you too much about the book.  Let me just say, in my opinion, it was a G-R-E-A-T conversation.  I’m talking P-O-S-I-T-I-V-E.

As she scanned down my manuscript, I heard her whisper, “Oh, this is good.”

Lordy mercy, my spirit is hungry for such encouragement.

I then grabbed my phone and purse, ran out the door, jumped in my car, zipped down the hill, over the highway, and wound my way over to my mother’s house for victory roast beef.  Okay, it wasn’t really victory roast beef.  Roast beef is far from my favorite food.  But, hey, it was cooked with TLC, and I was hungry.  I walked in the door smiling, which I rarely do.  I don’t mean that I don’t smile.  I just don’t like to walk in smiling.  My sister stood at the kitchen counter.  She looked up, and I announced, “I have a career.”

“No,” I said, still smiling.  I was smiling ‘cause I hear tapping, rapping at my door, and it’s all good for evermore*. 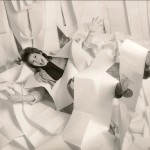 *  Okay, truth – it’s “all good” for today, not evermore … because writers have serious ups and downs.  In fact, I’m thinking about chronicling those ups and downs as I go through the rewrite and publication process on the sex book.  Is that a good idea?  Would you be interested in reading about the rewrite of the sex book?  Tell me what you think.