To say it’s blustery here in the ATX on this Christmas Eve is an understatement.  The wind wails outside my office.  The outhouse down the street is blown over on its side.  And inside my house, something clanks in the vents over the stove.  It does that every time the wind is strong.  My builder says it’s normal.  I don’t believe him, but I’ve learned to live with the noise.  In fact, I think of it as the one thing that makes my house unique.  Then again, maybe it’s the fact that a writer lives inside this house that makes it unique.  As far as I know, I’m the only writer residing in this little neighborhood.  I do know that when I first moved in, people referred to me as “Oh, you’re the writer.”  I wasn’t sure if that was good or bad.

I’ve only dared to give two neighbors copies of my true crime books.  I used to play with the child of one of those neighbors.  Come to think of it, I haven’t gotten to play with that child since then.  And the other neighbor, well, eventually she sent me a wonderful thank you email saying how much she enjoyed the book, that it made her realize how much she loved and missed reading, so she went out and bought a copy of another one of my books.  Emails like that mean so much to a writer.

So, today, this writer stepped into the blustery winds to go buy some last minute Christmas presents.  My sister had told me I should make presents this year to save money and show everyone just how much I loved them.  Her suggestion always was to bake cookies.  I wondered for whom I was supposed to bake those cookies.  My sister is overweight.  My mother is too skinny, but isn’t into cookies.  My aunt is overweight.  One cousin doesn’t eat sugar, another cousin doesn’t like chocolate, and to me chocolate chip cookies are the only kind to bake.  On top of that, cooking isn’t my “thing.”  I’m doing well to plop a piece of tilapia into a pan and toss some greens from a box of salad onto a plate

Still, based on my sister’s constant goading, I had this “genius” of an idea to take my cousin’s photographs and home videos and make CDs of his son growing up.  Alas, I don’t like Windows Movie Maker, which is installed on my PC.  I do like Dazzle Video Creator, which isn’t installed.  So, simple solution, right – install my old Dazzle software?  I quickly discovered that was easier said than done.  My Dazzle is for Windows XP.  My PC has Vista, and apparently there’s no downloadable patch.

So, I decided to go buy an I-link cord so that I could download the video straight from the camera to the PC and I’d suffer through with Movie Maker.  Guess what?  Easier said than done.  The freakin’ cord is over $25.  You can tell by my use of freakin’ that I’m really getting into the Christmas spirit now.  But then I found a closeout cord for 97-cents.  Baby, I’m there.

Happy, I drove home, unwrapped the cord, went to plug it in, and, yep, right, it was the wrong cord.  It’d cost me more in gasoline to return it, and I didn’t want to spend $25+ on a freakin’ cord that I’d use all of once on a camera that’s not even mine.

But then I had another genius idea – my laptop has XP on it.  I’d install Dazzle on it and edit video there …   Okay, I’m sure by now you’re getting bored with this tale of Christmas woe.  Let’s just say that didn’t work either, so I gave up and found myself walking down blustery streets this morning to buy Christmas presents.  I mean, we’re talking so blustery that leaves are swirling in the air like snow.  Dads are hiding their chilled children in their arms, and poor Santa is sitting outside City Hall posing for pictures with the kids.  And that’s when my heart softened a bit.

I don’t know what it is about Santa, but I always want to crawl in his lap and tell him what I want for Christmas, even though I know I’m way too old … and though I know I shouldn’t take the place of the kids who really deserve to be talking to him.  Those kids looked so happy, despite the fact that the wind was whipping off Santa’s hat and he was having to trip down the street, chasing it.

That’s when I stretched my legs into the only bookstore in my neighborhood – a Barnes & Noble.  I can’t remember the last time I walked into a bookstore just to look around.  I started out in the calendar section, worked my way over to the stationery, eased over to the bestsellers, read a few pages of Mackenzie Phillips’ High on Arrival, decided that wasn’t appropriate Christmas reading, walked over to the true crime section, gave a copy of Wasted a face-out, meandered over to the fiction section, checked out manga and graphic novels to see what they’re like, and finally maneuvered over to traditional novels to cruise down the aisles.  I was looking for friends’ books, but also looking for any cover that just caught my eye and said, “You’ve got to read me!”  And that’s when it happened.

I remembered how when I was young and living in New York, I’d walk into a bookstore, but I couldn’t stay long because my excitement at seeing and touching all the books, books I’d never see in a Barnes & Noble, caused me to have a colon attack and have to find a restroom – fast.

Yes, I know that’s too much information.  But it’s pertinent to the story.

Those bookstore colon attacks continued for decades as they were also due to me imagining my books on the bookstore shelves.

Now days, I never have colon attacks when I go into bookstores.  And I realized today that I sort of miss them because they represented the excitement, the yearning, the thrill, the dreaming of writing.

Today, though, two good things happened while I was in that bookstore.  One, I realized how lucky and blessed I am to walk into bookstores and see a copy of one of my books on the shelf.  Yes, it’s a bit disappointing in that in the past I’d walk in and see numerous copies of several of my books.  And now I’m lucky to see one copy of Wasted.  But that’s okay.  I understand why.  I’ve taken too much time between books.  I’m still blessed that I have at least one book in the stores.  I have friends who are much more talented and respected than I, and they have zero copies of their books in the stores.

But the other thing that happened that was even better was that as I stood there in front of all those novels, wondering how in the world one draws attention to their work so that a beginning novelist gets noticed, I didn’t want to leave those stacks of books.  I wanted to sit there and lick them up, eat them like homemade chocolate chip cookies, and I wanted to write.  I wanted to write like I yearned to write when I was in my 20s, standing in those New York City bookstores dying for a restroom.

So while I went out into the blustery winter winds on Christmas Eve to buy a present for my cousin, I came home with one of the greatest gifts from God – the desire to write again.  That’s a gift I haven’t had in Lord knows how long.  And I am grateful for it.

Merry Christmas to you all.

And now I’m going to go wrap my store-bought gifts.

By the way, the wind has nearly ripped one of my trees out of the ground.  It’s now tilted at a 45-degree angle.  But, hey, I like it.  It makes it unique. 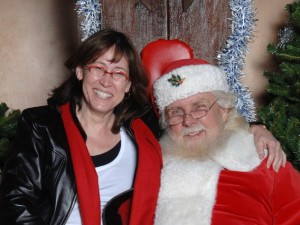 This isn't the Santa who had to chase his hat down the street. This Santa is a whole 'nother story that I'll have to tell another time.