I’m walking up and down the sidelines of a flag football game, awaiting the big play. The morning had started out cool and pleasant, but now the sun is beaming and I’m getting hot. I look at my 10-year-old cousin. He’s on the sidelines, down on one knee, and sucking on one small slice of orange handed to him by his coach. I want my cousin to be holding a hamburger. He’s too skinny. He’s like a piece of salt water taffy that’s pulled so thin that it looks like it’s about to break. This is my guy. My kiddo. My heart. And he’s supposed to make the big play. It’s a lot of pressure for a little guy, and so far he doesn’t seem to be handling it well. He’s dropped long pass after long pass, and he’s been proclaimed the team’s long pass superstar.

Sweat mats his blond hair into finger curls. He gets up, makes sure his flags are snapped to his belt, pulls on his gloves that his dad insists he wear so that the football sticks in the palms of his hands, and runs out on the field. In my hand I hold his grandmother’s Canon camera. I’ve been trying to get a picture of the big play. But so far, all I have is a picture of my skinny boy with his gloved hands up in the air, just before he misses the easy catch, falls to the ground, and his dad yells something to the effect of dad-gum it, catch it, son!

I know this isn’t like my boy. I’ve been throwing him passes since he was a little tyke and he’s always had good hands. I wonder if he’s falling under the pressure of the first game … or the family demands … or the pronouncement that he’s the team’s long pass superstar. Maybe, it’s all three.

I pull his dad aside and remind him that when he played Little League baseball – or more accurately, when he wasn’t playing well – that his dad used to yell at him through the fence until he made him so angry that he went out and played great the rest of the game. I remind him that I tried that tactic on him when I was teaching him how to water ski, and all it got me was my friends angry at me for being so rough on him. Today, he walks away without saying a word. And I’m not really sure why I told him that story. I don’t want him yelling at our little guy. I don’t think it’s good for the kid. But I don’t know what is good.

That’s when I find myself thinking about a TV news show I’d watched just a few days before. It was about kids and how to motivate them to take chances, to try harder, to do better. They showed a little girl who’d done well on a test. Afterwards, she was praised for being smart. From then on, she took the easy route, fearful that if she didn’t she would fail and not look smart. In contrast, a little boy who’d done poorly on the test was praised for working hard and trying hard. The next time, he did better than the little girl.

I contemplate that as I walk the sideline and watch my little guy drop another easy pass. He walks off the field. I can tell he’s mentally pounding his fists against his head for being so stupid as to drop an easy pass.

He comes over to me.

He doesn’t smile or nod or act encouraged in the least. But soon he’s back on the field and he’s going for another long pass and, dang, he catches it and scores a touchdown. I scream until my throat hurts.

And that’s when it happens – I realize I need to tell myself almost.

Almost all my life, I’ve been told I’m smart, and I succeeded – not on the level I planned. But in the eyes of struggling writers, I’m a success. My first book briefly hit the New York Times bestseller list. My second book outsold the first. Both books went into two printings. Then, my third book went into six, seven, or eight printings – enough that I lost count. So, of course, I expected my fourth book to do even better. And, at first, it did. It was getting good reviews, a second printing was set, then moved up because sales were that swift, and then WHAM, the book was slammed with horrible Amazon reader reviews and sales nose-dived. The second printing was cancelled. And like my little guy, I began mentally slapping my head and telling myself how stupid I am, how untalented I am, what a failure I am.

I’m embarrassed to admit that it affected my writing – so much so that it took me four and a half years to finish just the first draft of my fifth book. I finally turned in the manuscript last May, an astounding two years past deadline. In my eyes, that’s an entire two seasons of dropped, easy passes. “Almost, almost,” I find myself whispering right now. After all, I’m a journalist and meeting deadlines is part of my job description. Missing them can destroy my career, especially in this day and age. “Almost.” I remind myself that I tried hard and I worked hard and I did turn in that manuscript, the most difficult one I’ve ever written because in this book I tried something new. I’m not going to say what that is right now, but let me just tell you if I hadn’t written that book, I wouldn’t be able to write this post. And my hope is that this post gives you some encouragement.

Still, my fifth book remains an almost situation. I have yet to get notes back from my editor, to do the rewrite, to have the book accepted and published. Until then, I walk up and down the sidelines of my office and tell myself, “Almost.  Almost.” Eventually, though, I’ll get it right. And when I do, I’ll scream until my throat hurts. 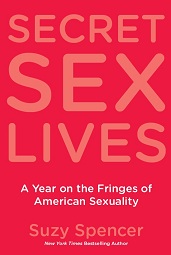 That fifth book that I mentioned above became my first memoir, Secret Sex Lives: A Year on the Fringes of American Sexuality.

Secret Sex Lives was named a Publishers Weekly Fall 2012 pick in the memoir category, a Barnes & Noble Editor’s recommendation, one of Creative Loafing Tampa’s Top 10 Most Provocative Book of 2012, one of Bustle.com’s six Steamy, Sexy…Science? Books That Will Turn You On in the summer of 2013, and a Writers’ League of Texas 2013 Book Awards finalist in the nonfiction category.

But I’m not screaming at the top of my lungs. I’m telling myself, “Almost. Almost,” if for no other reason than to keep me trying … to keep me writing.